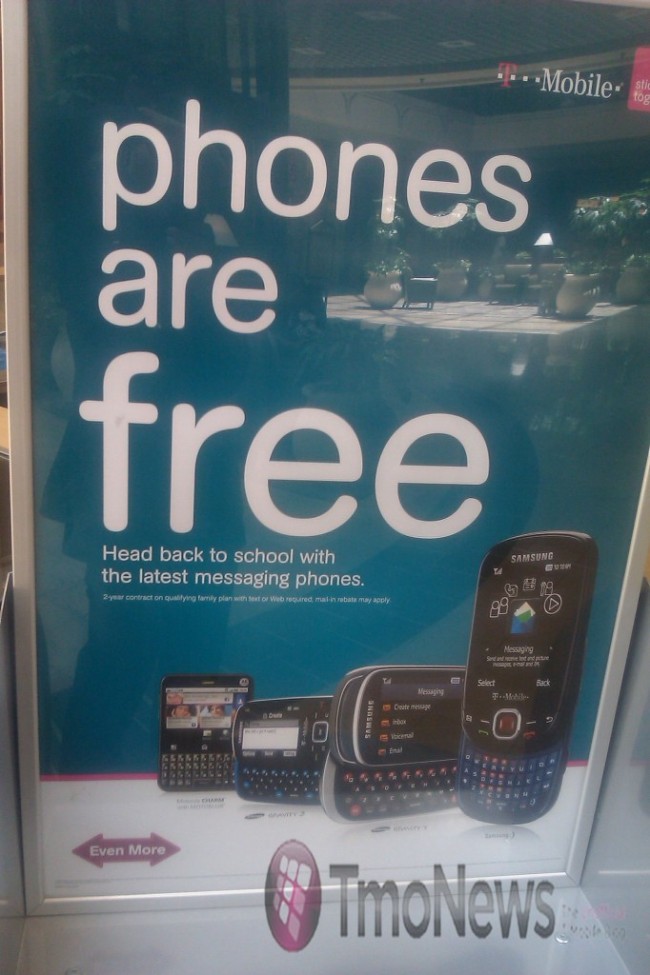 Most of the hardware in the T-Mobile messaging phone lineup comes from Samsung, but the recently discovered Motorola Charm is the most interesting exception to that rule. Today, we get off-hand confirmation that the QWERTY square will be bringing Android OS to Magenta’s stable of affordable messaging phones. And, to make the Charm that much more appealing, it looks like T-Mobile will offer the Android phone for free as part of the carrier’s back-to-school promotions.

We know this because T-Mobile recently posted a back-to-school ad showing off the messaging phones that it will be promoting to parents of kids that are going back to their respective schools. In the ad, we can see the Charm hanging behind all the Samsung messaging phones – the recently announced Samsung 🙂 (Smiley), Samsung Gravity T, and Samsung Gravity 3. The difference, though, lies in the Motorola Charm’s Android OS.

Messaging phones, for those of you not familiar with the term, are usually dumbphones (featurephones) that focus on text messaging capabilities. They usually lack a traditional smartphone OS (iPhone OS, Windows Phone, webOS, Android OS, BlackBerry OS, Symbian OS, etc.), but make up for it with a full QWERTY keyboard. The Motorola Charm, no the other hand, features a QWERTY keyboard alongside Android OS. It’s like you get the best of both worlds: cheap and capable.

T-Mobile says in their ad that all their messaging phones will be available for free. That would make the Charm the cheapest Android phone available from any US carrier (not refurbished) – in other words, the only smartphone powered by Google’s mobile operating system to be available for free with new contract. We’ll have to wait on Magenta to release specifics on launch, but expect to see the Charm going live before school starts up again in about a month from now.

Anyone out there planning to get one of these phones?

[Update]
The Charm is not a slider, as mentioned in the comments below. Thanks for the clarification. Post updated.

While the Android Market is far from perfect, it's still gets the job done just fine. And, with recent performance...