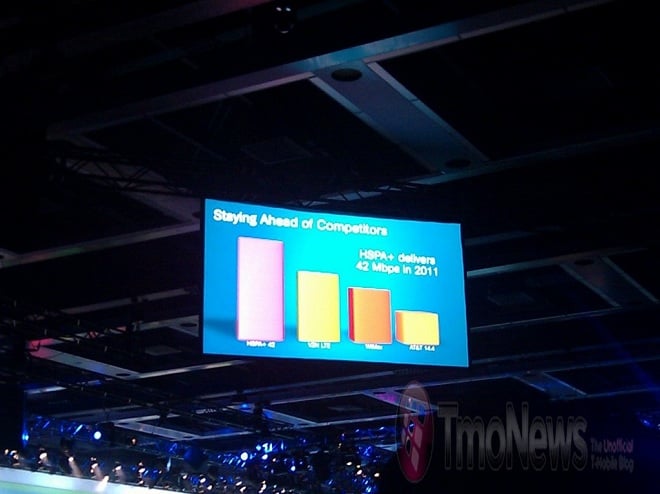 It wasn’t that long ago where T-Mobile didn’t even have a 3G network but the fourth-largest carrier in the United States is now crowing about how its HSPA+ network can deliver “4G-like speed.” A leaked slide now suggests the company could thoroughly outpace rivals’ 4G networks, as T-Mobile may be aiming to deliver 42 Mbps over its 3G network as early as next year.

Until now, T-Mobile had often said its HSPA+ network had a theoretical limit of 21 Mbps – this is the theoretical limit though but my real-world testing found download speeds hovered between 8 and 10 Mbps. T-Mobile already covers nearly 75 million Americans with this network and it plans to have more than 185 million people blanketed by the end of the year.

The company doesn’t have an HSPA+ handset yet but one is expected in the second half of the year. The majority of T-Mobile’s Android lineup, including the myTouch 3G Slide, can access get up to 7.2 Mbps download speeds.

If T-Mobile can achieve these types of speeds with HSPA+ next year, it could be offering the fastest mobile broadband in the nation. Sprint Nextel is already offering 4G services using WiMax that offers about 6 to 12 Mbps download speeds. Verizon Wireless is rolling out a 4G network based on Long-Term Evolution technology and it delivers speeds that should be similar to Sprint’s offerings. AT&T is expected to begin its LTE rollout in 2011, as well.

It’s still way too early to tell if T-Mobile will be able to pull this off officially or if this slide is just an ambitious prediction of the future. This type of move may be necessary for the carrier to gain traction, as it is still decidedly behind the other three carriers in terms of subscribers. If the company could deliver the fastest mobile broadband speeds and still retain its relatively low prices and good customer service, I could see people flocking to T-Mobile in droves.

[Via Android and Me]

If you've been waiting to jailbreak and unlock your shiny new iPhone 4 to use with any GSM carrier you...