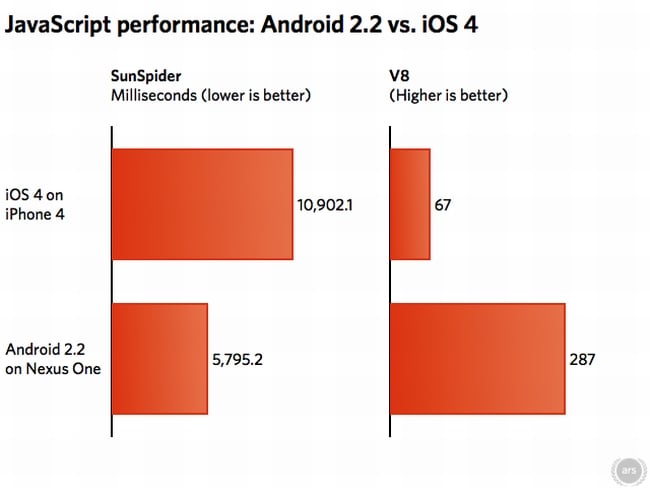 Android 2.2 is fast. Stupid fast. Crazy fast. I’ve only been using it since Sunday, but I can say without hesitation that my Nexus One literally feels like a new mobile phone. I’m not alone in that regard. Ars.Technica performed the age old SunSpider, and the new school V8 Javascript benchmarks on both Android 2.2 Froyo running on a Nexus One, and iOS 4 running on the iPhone 4, and the results are stunning. The iPhone 4 with iOS 4 gets left in the dust by a Nexus One running Android 2.2 Froyo OS, when it comes to Javascript performance

The results … well when it comes to the V8 benchmark Android 2.2 is over 3x faster than the iPhone. And for SunSpider it’s almost 2x faster. The data isn’t too surprising, though, as Google themselves touted Froyo’s faster Javascript performance during the Google I/O 2010 keynote. Google showed off a Javascript webpage rendering on the both the Nexus One with Froyo and an iPad. The N1 literally swam circles around the iPad. Sure, Apple boasted about having their own Javascript enhancements for iOS 4, but it clearly can’t compete with the latest iteration of Google’s mobile operating system.

If I had an iPhone 4 with me I’d make a comparison video, but since I don’t I’m making a small request to internet users around the world, who just so happen to have a Nexus One and an iPhone 4, to load something up on YouTube.

Anything to make iPhone users cry a little.

It gets me off.

Update: I asked Axel from test-mobile.fr to run SunSpider and V8 on the Nokia N8 he currently has in his possession and this is the tweet he sent me: “well,looks like its a total fail for the moment (still a proto),sunspider not passing accessfannkuch (browser stops) & v8 crashing the phone”.

You hear that Nokia? TOTAL FAIL.