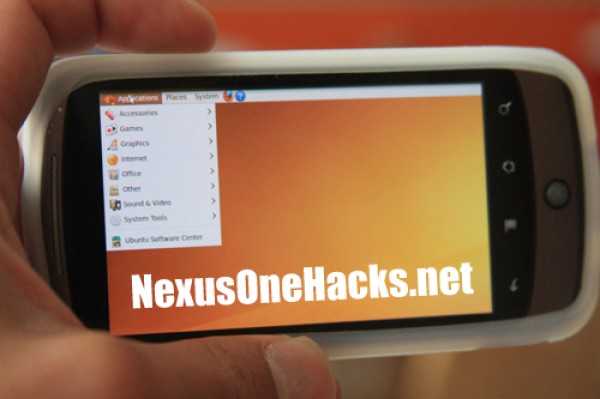 If you’re someone who likes to tinker with your phones, or just someone who just likes to test your geek muscle, then you may be happy to hear that you can now install Ubuntu onto your rooted Nexus One!

With Ubuntu on your Nexus One, you can run native Ubuntu/Linux applications right from your device. Some may not feel the need to do this since not everyone needs to have a full Linux box in their pocket, but I’m sure there are quite a few people who’d like to be able to do this simply because they can. The instructions are very straight forward, and if you have any familiarity with Linux or a terminal, you should have no problem accomplishing the task. It can take a while to get Ubuntu up and running on your N1, but if you really want to see this in action, you’ll be rewarded for your patience.

Something we see with Ubuntu on the Nexus One that we didn’t see on the HD2 Android/Ubuntu port is that the Nexus One allows you to zoom in to your desktop. This is likely because the Nexus One method uses a VNC viewer, and from the looks of it, the HD2 did not. The resolution of Ubuntu is also sized up a bit to look a little better on the Nexus One, since the OS relies on a mouse. After everything is setup, you can use all the pre installed Ubuntu applications that come bundled with the OS to your heart’s content. There’s something about having not one, but two operating systems in your pocket – one of which is a full-fledged desktop OS.

Anyone interested in giving this a try? If I get my hands on another Nexus One anytime soon, I’ll be sure to give this a go. Until then, I’ll let you guys try it out and leave the details below!

How-to video below, and all necessary files can be found at the Via link below:

If you were wondering when you'd be able to get in on the Samsung Galaxy S action with the Captivate...