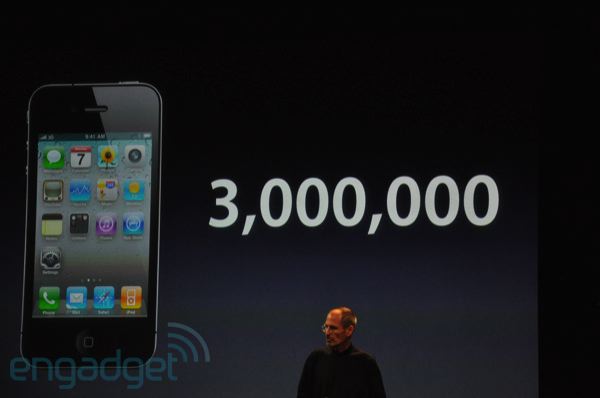 It hasn’t even been a month since the iPhone 4 went on sale, and Apple has managed to sell 3 million units already. In case you didn’t notice, that’s quite about a million per week since its release, and it still seems to be sold out everywhere. Of course, the iPhone 4 isn’t without its problems. Today, Apple and Steve Jobs held a press conference to address the iPhone 4 antenna issues where the press and media are hoping the company proposes an agreeable solution. But before getting on with things, Jobs had to throw out some figures to divert our attention.

Not only did the iPhone 4 hit three million customers, but it is apparently the best product Apple has made to date. According to Apple, it has been judged to be the one number one smartphone on the market (Consumer Reports said the same, although retracted its recommendation to buy) and is number one in customer satisfaction. That’s number one in customer satisfaction over previous iPhones and other smartphones on the market.

While the numbers are impressive, and the device packs a lot of very impressive technology, there is a reason Apple is holding a press conference today. Let’s just hope that when all is said and done, everyone comes away happy. Knowing Apple’s critics, however, I somehow doubt that.

Just two weeks after it was officially announced, Firefox Home is now available for the iPhone through the iTunes store....