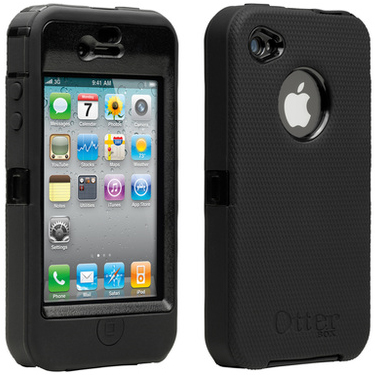 OtterBox just announced that their first iPhone 4 case is now available, which will offer a ton of protection against impact as well as ward off the vile Death Grip. The Defender Series case is comprised of three layers: a scratch- and water-resistant screen, a hard plastic case, and a rubber skin on the outside. Access to all of the necessary keys are there, like volume and lock, as well as a hole for the camera and LED flash. There’s even space to show off the Apple logo, for those times when you feel the need to caress it lovingly.

The Defender Series is quite the set-up, just be prepared to lose a lot of slimness. On the one hand, it makes your iPhone 4 no longer the skinniest smartphone in the world, but on the other, you’ve got plenty of space to spare. I actually found when using the Defender with the BlackBerry Pearl, the added size made it feel better in the hand. For those wanting to keep their iPhone 4 slim, OtterBox will be offering their Impact Series (a simple silicone skin with extra protection around the corners) sometime soon. For something a little in between, the Commuter series includes a removable hard case, so you can swap between slim and pocketable or large and in charge modes as needed.

The iPhone 4 Defender case runs a relatively steep $49.95, but it’s likely not on the list of free cases Apple is giving out, and I’d be hard-pressed to imagine any other case protecting a phone better.

Ready to get your 'learn' on? A new version of the Britannica Concise Encyclopedia 2010 is now available for those...