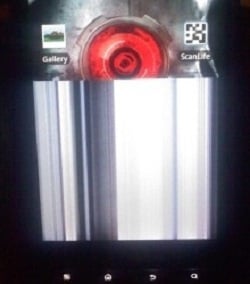 It’s only been a few days since the launch of the Motorola Droid X on Verizon but we’re seeing scattered reports of users with screen issues.

The forums are howling with a few reports of dead pixels and flickering screens. I could imagine this would be the worst feeling if you actually waited in line to pick up this Android superphone.

After noticing dead pixels, one users decided to return the Droid X and was met with some awful news.

Took it back to Best Buy and they stated that I was the 3rd one returned today with the dead screen…OUT OF 6 THEY SOLD ON LAUNCH DAY!!!!!! … I have my name down for the next X they get in but am a bit hesitant to get one…but I guess by the time the come in next week I can see if more people have this issue.

It’s not just the forums that are blowing up, as a few YouTube videos have surfaced with the Motorola Droid X screen problems.

That 4.3-inch screen is one of the major draws of the Motorola Droid X, so it would be a shame if it didn’t work as advertised. Along with that display, the Android handset rocks a 1 GHz TI OMAP processor, 8-megapixel camera, Mobile Hotspot option and all the connectivity you’d expect from a device of this class.

To be fair, there are always a few bugs in the launch of consumer electronics products and social media and YouTube can make this seem more widespread than it really is. I’ve put in word with Verizon and am hoping this is an isolated issue that doesn’t impact many users.

We’ll update when we hear back from Big Red. In the meanwhile, let us know how your Droid X is holding up in the comments, readers.

We just got word back from Verizon and it doesn’t appear to be a massive issue. According to Verizon spokesperson Brenda Raney:

MOG wants to make it easier for you to rock out on the go and the streaming music company has...