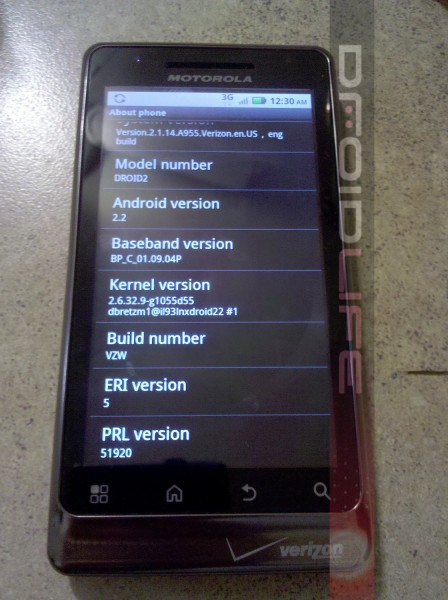 If you were worried that the upcoming Motorola Droid 2 wouldn’t launch with the latest version of Android, have no fear because the leaked shot above clearly shows that the next Motorola superphone will be rocking Froyo.

That means you’ll get full Adobe Flash support, increased overall performance, a snappier web browser and native tethering (still subject to Verizon monthly fees, though) out of the box. The Droid 2 also improves upon the original by rocking a 1 GHz processor from Texas Instruments, a more rounded keyboard and I wouldn’t be surprised to see it sport an 8-megapixel camera that can record 720p HD video like the Motorola Droid X.

In news that may disappoint stock Android fans, the Droid 2 is expected to have the toned-down MotoBlur that’s found on the X. This isn’t your momma’s MotoBlur or, err, your Cliq XT’s, as the company has toned down the intrusiveness to make it more useful and visually appealing. I still prefer stock Android or HTC sense, but it’s still a good experience, in my opinion.

So, with the death of the Google Nexus One and MotoBlur on the next Droid, it looks like we can kiss high-profile stock Android devices goodbye (please step back from that ledge, Blake). I don’t necessarily think this is a bad thing though.

Check out our Evolution of Android and you’ll realize that the little, green robot was kind of crummy when it came out. It had potential but it was still missing key features and just lacked polish overall.

Flash forward to Android 2.1 and 2.2 and you have one of the best, if not the best, mobile operating systems on the planet. Android 3.0, or Gingerbread, is supposed to up the ante again this fall but then the company plans to have a slower software upgrade pace. Like rival Apple iOS, I’d expect major versions of Android to trickle out once a year after Gingerbread.

The slower pace will allow devices like the Droid 2 to have the latest features while still giving Motorola its chances to put its own software touches on it to stand out from the crowd. Sounds like a win-win, right?

The Motorola Droid 2 could hit as early as August, so, friend, are you going to wait for this or just snap up the X?

Adobe is having a little fun with its growing rivalry with Apple, as the company is showing off a two-way...