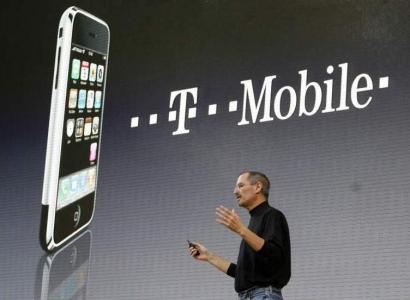 If your head is already spinning with iPhone rumors, most of which never pan out, and which carriers Apple plans on partnering with in the future, forgive me. This latest rumor is hot off the press and this time, it’s not a Verizon one! Instead, the iPhone is apparently going to hit T-Mobile, again, this fall according to a source close to Cult of Mac. Although it has been reported that AT&T’s exclusivity deal was good until 2012, this new rumor shakes all that up and says it’s over by this fall when the Apple smartphone is slated for a T-Mobile release.

Now, I’m not saying this is full of holes or impossible or anything, but let’s consider a few things here. The first question that pops into mind is, “Will it be compatible with T-Mobile’s 3G network?” Here is what Culf of Mac says:

One important point, to which I don’t have the answer, is whether the iPhone 4 is compatible with T-Mobile’s 3G network. Customers with unlocked iPhone 3GS are able to use T-Mobile’s Edge data network, but not the faster 3G, which operates on the 1700/2100 MHz bands. According to Apple’s specs, the iPhone 4 adds the 2100 band, but not the 1700 band, which has led some to conclude that it is incompatible with T-Mobile’s 3G network.

However, there is some debate whether Apple simply didn’t list the 1700 band, which seems to be the convention when listing such specs. And no one has yet tested the iPhone 4 on T-Mobile’s network. Despite the efforts of the Dev Team, there isn’t yet a publicly available unlock for the iPhone 4.

First of all, there are bloggers and mobile enthusiasts who seem to spend their free time trolling FCC reports and listings. Apple can’t hide such a huge detail from the FCC, but there could be a chance it asked for confidentiality as Apple has done in the past.

Secondly, Apple mentioned in its recent earnings call that it was selling all the hardware it could produce. The company even had to convince investors that long lead times are a “good problem to have.” Unless the current iPhone 4 units are hiding a dirty little secret, Apple will have to start cranking out what it’s already having difficulty producing, and then some. Given the current shortage, and having to produce new units with T-Mobile compatible AWS bands, it’s hard to see this rumor as being true, or at least being able to meet that time frame. Otherwise, Apple will have an EDGE-only device, and I highly doubt it would do that given its concern for customer satisfaction (insert hater jokes here).

Apple and T-Mobile have declined to comment, naturally, but one has to wonder why this rumor is hitting now. Other rumors say that the iPhone 4 will be coming to Verizon this January. The iPhone 4 is a hot device, despite its antenna issues, but these rumors are getting a little out of hand. It’s rare for “sources close to the situation” to ever be correct given the iPhone’s rumor history and track record for analyst speculation. Those who are close enough to know, and I imagine there aren’t many given Apple’s secrecy even internally, would probably know better than to leak this kind of info to the media.

We’ll see what happens this fall, but my prediction is that it will be all crickets from T-Mobile.