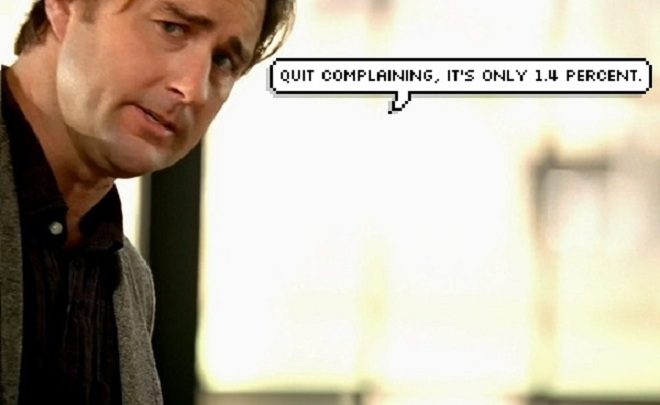 Apple iPhone owners may think AT&T has a huge percentage of dropped calls but the nation’s second-largest carrier said it drops less than 2% of calls nationwide.

In response to a recent ChangeWave study, AT&T said:

Statistically valid drive test shows the AT&T network continues to deliver the nation’s fastest 3G network and near best-in-class call retainability nationwide. AT&T’s network dropped only 1.44 percent of calls nationwide, within two-tenths of 1 percent of the industry leader and a difference of less than two calls out of 1,000.

Those results, from GWS, show that, on a national basis, AT&T is within just two-tenths of a percent of the industry leader in wireless call retainability. That’s a difference of just two calls in a thousand, a virtual dead-heat.

I know our friends in Japan and Europe are laughing about how we’re celebrating a company only 1.44% of dropped calls but, if accurate, that’s not too bad considering the expansive geography of the United States and the amount of users.

AT&T has done a lot to improve the voice and data quality of its network over the last few years, as the company invested nearly $18 billion last year in improvements. Many of these improvements were aimed at reducing the amount of dropped calls.

This included switching to 850 MHz spectrum in certain markets, as well as rolling out new cell towers. Of course, rolling out new infrastructure isn’t always a matter of money, as Apple CEO Steve Jobs said AT&T has been trying to put up new towers in San Francisco for three years.

Many Apple iPhone owners would kill for only 1.4% of their calls to drop, as I’ve heard many tales of dropped call woe from New York and San Francisco dwellers. Part of the iPhone problem could be from how Apple designed the device, too, as the company had relatively little experience in the mobile space (don’t count the MotoROKR).

The whole “Antennagate” problem could be exacerbating the dropped call problems on the Apple iPhone but the company said less than 1% of customers have called to complain about that.

So, say you're stoked on your new iPhone 4 and the integrated 5-megapixel camera's ability to shoot really high quality...