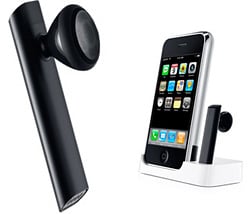 Uh oh, it looks like iOS 4 in all its multitasking glory has a small issue regarding Bluetooth connectivity. Both iPhone 4 and iPhone 3GS users are reporting dropped connections when using Bluetooth on iOS 4 for both headsets and in-car systems. This is definitely not a good thing since those who travel a lot rely on Bluetooth for hands-free safety while driving. And in many states, it’s actually against the law to use your phone to talk or text unless it’s hands-free. So this clearly causes a dilemma for the people who absolutely need to use Bluetooth on their iOS 4 devices.

Users of the Apple smartphone have been contacting AppleInsider to report their problems:

“Nearly every time I’m in my car the iPhone disconnects from the built-in Bluetooth system,” one reader with an iPhone 4 wrote. “This never, ever happened with my 3G phone. I have a case number with AppleCare and they refuse to acknowledge the problem or replace the phone, even after having the problem persist after downloading a fresh copy of IOS 4, reinstalling the software and setting the phone up bare with no other apps. Could this be another antenna problem?”

It’s safe to say that the problem is likely isolated to iOS 4 if users were not experiencing this issue before. The fact that Apple is allegedly refusing to acknowledge the problem is a whole other issue itself, which is surprising given the PR nightmare it faced with “Antennagate.”

Users have said that their Bluetooth connections will sporadically drop after the two devices are successfully paired. Others can connect, but are met with a message that says “no media found” when trying to play music. And some said they have experienced muffled voices when placing a call over Bluetooth.

Hopefully this is an issue that can be fixed quickly and easily with software, naturally, since it seems the issue originated from upgrading software, anyway. As for the IntoMobile crew, we have confirmed Bluetooth problems with an in-house iPhone 4 and an Infiniti G35 in-car bluetooth system. Until then, if you absolutely must use your phone in the car to talk, try using your wired headset for now if you’re experiencing these Bluetooth issues yourself. Better safe than sorry!

So, you've got a shiny new iPhone 4 in your pocket and you can't wait to try out the new...