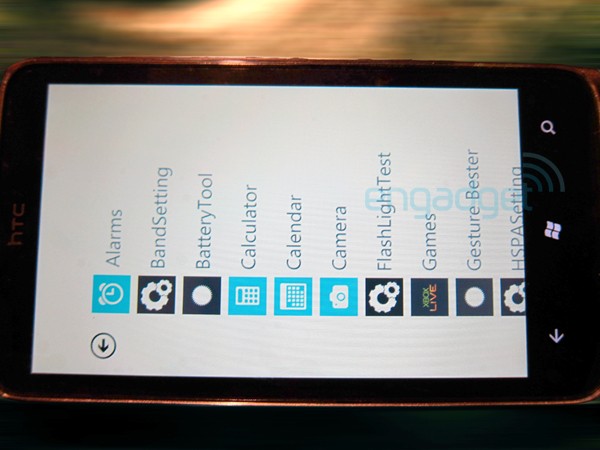 Speaking of HTC devices running Windows Phone 7, a little mystery device has been spotted out in the wild. Up until now, we’ve only seen Samsung handsets running about with Microsoft’s latest mobile operating system. Now we’re seeing what one HTC Windows Phone 7 handset will look like. It’s nothing super exciting or groundbreaking since we already know what the chassis requirements are, but it’s nice to see nonetheless. It’s apparently sporting a 3.7 inch SLCD display and is powered by a 1GHz Snapdragon processor, which is definitely plenty of CPU power for an apparently lightweight OS.

A tipster told Engadget that the device’s front buttons are actually touch sensitive, much like the Nexus One or HTC EVO 4G. It’s also allegedly sporting an 8MP camera with what appears to be a single LED flash, which isn’t a surprise given the very capable 8MP shooters found on HTC’s Droid Incredible and EVO 4G.

While we heard a little earlier that HTC will be skinning Windows Phone 7 handsets with Sense UI, this particular device is pictured without it. Not all that surprising if this happens to be a developer’s phone that made its way out of Redmond, WA before HTC could finish its Sense UI for the initial WP7 build.

With WP7 handsets already being thrown out into the wild, rumored release dates in late September or October are beginning to seem more likely. Are you getting excited for what could be Microsoft’s big comeback in the mobile space?