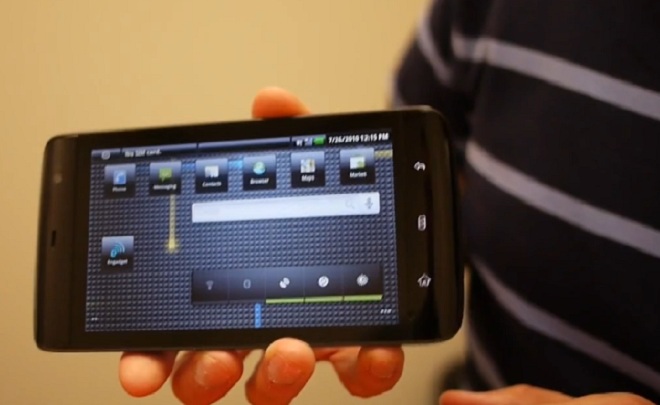 The Android-powered Dell Streak is tantalizingly close and the company is taking its message to YouTube to answer a few questions about software upgrades and carrier compatibility.

The device features a 5-inch touchscreen with cellular capabilities. At that range, it’s kind of a tablet and kind of a smartphone – maybe a “smarblet?” The device will launch with the anemic Android 1.6 and this immediately leads us to ask when will Eclair and Froyo be coming to it. In the video below, Dell said it will be upgrading to Froyo but it didn’t give a definitive time line.

Instead, the company showed off some of its custom user interface layer on the Dell Streak with Android 2.1. This includes a revamped notification system and a different app launcher. I know I can’t wait for Android 2.2 to hit the device because the full Adobe Flash experience should be good on a device with this size of screen.

The Android 2.2 update should also make browsing better because it will improve JavaScript performance and the overall speed of the Dell Streak should get a boost with the new software, too. Dell’s custom UI layer may be leading to an upgrade delay though, as it will have to customize the software to work well with Froyo. We’ve seen this before with HTC Sense and Motorola’s MotoBlur on the Droid X.

Even without Froyo, the Dell Streak looks pretty cool with its large screen, Wi-Fi, GPS, 3G, 512 MB of RAM, a 1 GHz processor, a 5-megapixel camera and a front-facing camera for video calling. I can’t wait to get my hands on one.

The video also said the Dell Streak won’t work on T-Mobile’s 3G network, which isn’t news to us because we knew it would be compatible only with AT&T’s 3G network. There’s still no exact release date but it should be coming sooner, rather than later.

Any interest in the Dell Streak with Android? Check out the video below and let us know what you think in the comments.