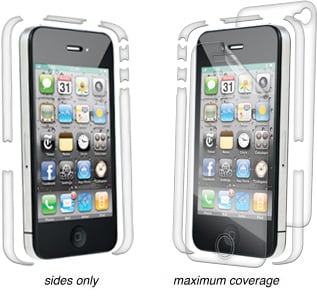 All you iPhone 4 owners out there still not convinced by Apple’s official stance on the antenna attenuation problem being par for the course will be glad to hear that Best Buy and ZAGG are teaming up to give away free invisibleSHIELD 4FIX films to thwart the dreaded “Death Grip” on your shiny new Apple smartphone. The transparent film wraps itself around the iPhone 4 antenna, effectively providing insulation between the stainless steel band and your skin so that the signal attenuation issue is mostly resolved.

From what we’re hearing, any iPhone 4 owner can walk their bitter behind into a Best Buy store and pick up the antenna-covering invisibleSHIELD 4FIX film for free – and the big box retailer will even install the film for you at no cost. The offer reportedly isn’t just limited to those that have purchased their new Apple smartphone from Best Buy, it’s actually open to anyone and everyone that can cop to owning Apple’s techno-drama queen of a handset.

So, if you’ve been feeling a little burned by Apple’s new smartphone antenna design, and you’d rather not cover up your beautiful glass-and-steel smartphone with an awkward bumper case or otherwise aesthetically unpleasing full-body case, we suggest you get yourself down to your local Best Buy soon. If you like the invisibleSHIELD 4FIX, you might even want to consider picking up a full-body shield as well. We’re sure the blue-shirts at the store will try to convince you to upgrade to the full-body shield anyway.

Are you planning on picking up some of ZAGG’s 4FIX films?

Apple has brought on another load of drama onto itself after seriously mishandling the iPhone 4 antenna issue - partly...