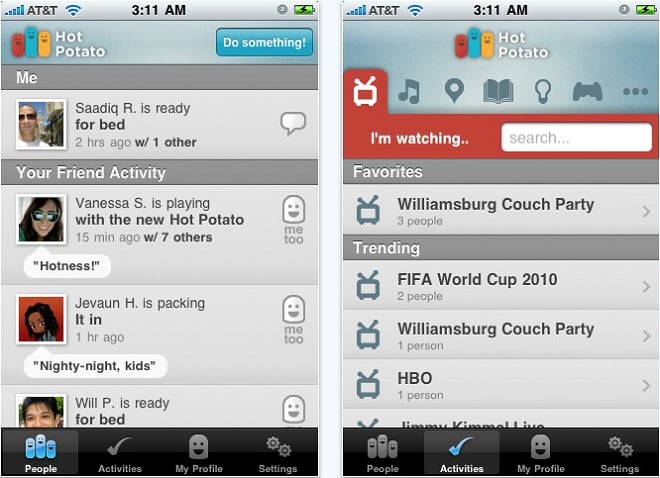 Facebook is reportedly on the verge of acquiring the social-activity site Hot Potato, and the deal is another sign that the social networking giant plans to roll out a check-in service which could compete against Foursquare, Gowalla and others.

TechCrunch is reporting the deal will be for about $10 million, which isn’t much in the tech space and makes the deal seem more like a talent acquisition than a real tech acquisition. Hot Potato does have an Apple iPhone app which allows check ins, as well as the ability to share other content.

If and when the deal is completed, it should bolster Facebook’s efforts to get into the location-based service game with a check-in system. I actually expected Facebook to roll this out a few months ago at its developer conference and early information suggests it will involve a “Places” tab in the mobile version and apps. You’ll reportedly be able to update your status with your location in line, as well as other location-centric goodies.

We’ve also seen reports that the Facebook check-in service will launch with McDonald’s as a partner. While the fast-food chain doesn’t scream “high tech,” it is the height of mainstream and I could easily see it a success if the partnership yielded a few discounts for checking in at Ronald McDonald’s fast-food house.

Moving forward, it’s clear that mobile and location will play a huge role in the future of Facebook. The company’s Erick Tseng, recently poached from the Google Android team, said the social network wants to become a mobile platform and check-in services could be an important part of that strategy.

It’s unclear if the Facebook check-in service will directly compete with Foursquare or if it will allow third parties to build apps on top, but it represents a strong tool for location-based services. If your local Starbucks shoots you a discount every time you’re near it, that could be kind of useful but it could also be spam-like and annoying after a while. Now, if the service only sends you a message when a Facebook friend is there, or when it’s offering a drink that your friends really enjoy, that makes it much more powerful.

Today may be the day we finally get confirmation that RIM's rumored and unofficial BlackBerry tablet, codenamed "Cobalt," will be...