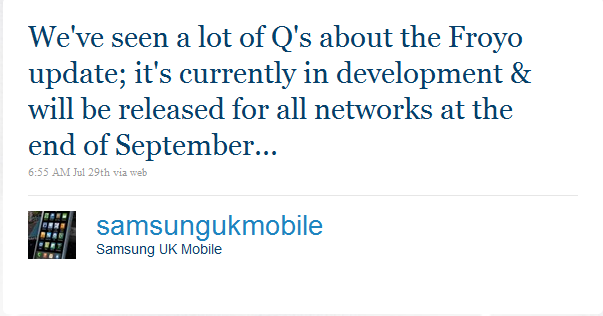 With the recent leak of a Android 2.2 (Froyo) test release for the Samsung Galaxy S, one has to wonder when the official build will be available for everyone. Well, according to SamsungUKMobile’s Twitter account, you can expect it to hit in September.

This is for the original, international Galaxy S, and not for any of the US variants, but we couldn’t imagine it would take all that much longer for the update to hit those US variants. Samsung keeps throwing the punches, and from what I can remember, the Galaxy S will be receiving Froyo faster than any other device since it’s initial launch. The Nexus One expected, of course.

As I have said before, the TouchWiz UI found on the Galaxy S devices isn’t nearly as integrated than other customized Android user interfaces, like HTC Sense, making Android updates like Android 2.2 Froyo easier to roll out, from a manufacturer perspective. In comparison, HTC’s Sense devices are heavily customized, so making a newer version of Android play nice with their custom skin will take longer than a UI that just goes surface deep. Though Froyo for Sense devices is on its way soon, too.

The end of September doesn’t sound too bad for Froyo, now does it? The only thing about waiting is that there may be an even better phone hitting market out before Froyo hits, and we’re counting on it. It kind of keeps us with a job that way.

Still, the Galaxy S is a great device, and I’d love to see what else Samsung plans to package in the upcoming Froyo update for the device. The obvious feature that will probably left out of many phones to get the Froyo update is the 3G Mobile Hotspot feature. Carriers have to make their money somehow, and why not charge for a feature that Google is trying to give you for free?

Either way, it’s cool that we have a confirmation on the status of Froyo on the Galaxy S, we just wish it was today.

Motorola Droid Gets Some Android 2.2 (Froyo) Lovin’ Next Week

The beauty of having a device like the Motorola Droid is that it doesn't have a custom user interface, which...