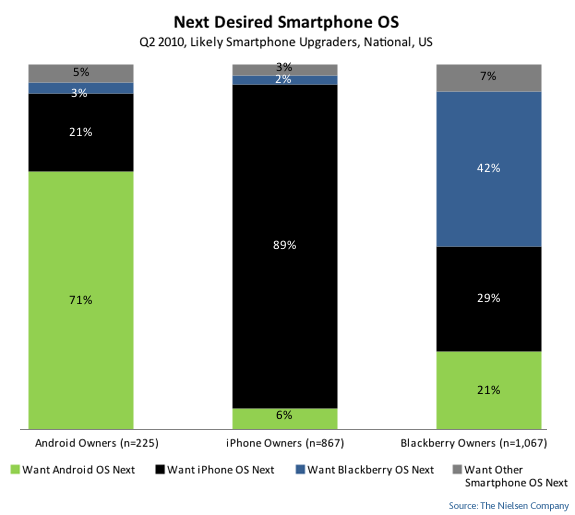 The iPhone and Android operating systems are taking the US by storm, and it seems Google’s mobile OS has just surpassed Apple’s little darling of a smartphone in sales this past quarter – Android comprised 27% of last quarter’s smartphone sales, while the iPhone accounted for 23%. Meanwhile, it seems that most BlackBerry owners aren’t too sprung on their smartphone of choice, as more than half of surveyed users are looking to a smartphone of a different flavor as their next purchase. With RIM getting the boot in the UAE, the BlackBerry maker has seen better days. 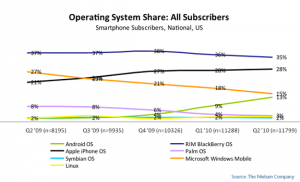 The iPhone is apparently still white-hot when it comes to smartphone appeal in the US, but Android is fast overtaking Apple’s smartphone. The iOS-powered smartphone saw its US marketshare staying flat, at 28% of the US market, from Q1 2010 to Q2 2010. Google has been seeing meteoric growth, with Q4 2009 marketshare of 4% growing to 9% in Q1 2020 and now standing at 13% in Q2 2010. RIM, on the other hand, saw its BlackBerry brand declining quarter after quarter to 35% of the US market in Q2 2010. The most recent quarter was the first in which sales of Android phones surpassed sales of the iPhone, but just barely. Still, when it comes to smartphone loyalty and desirability, the iPhone still takes the crown.

Nielson recently surveyed 867 iPhone owners in the US to find that a whopping 89% want an iPhone as their next smartphone – makes sense, the iPhone uses the iOS, which is still tops when it comes to a clean, easy-to-use user interface. Among a sampling of 225 Android owners, a surprising 21% are looking to the iPhone as their next smartphone purchase. And, out of 1,067 BlackBerry owners, it seems that 29% are keen on Cupertino’s mobile phone offerings.

Now, compare those loyalty stats to the 72% of Android owners that want to stick with the little, green robot and the relatively disheartening 42% of BlackBerry owners who would choose BlackBerry again as next their smartphone platform, and it’s clear that Apple still has the lead in brand loyalty and appeal.

What’s most alarming here is that half of current BlackBerry users seem set ditching their smartphone brand for something a little more polished and trendy. It’s not clear how much RIM’s aging BlackBerry OS design or their relatively clunky handsets have affected consumers’ perception of the brand, but it’s clear that users aren’t happy. What’s more surprising is that RIM saw smartphone shipments growing 42% year-on-year and shipped more than 32% of US smartphones in Q2, more than Apple.

So, if you’re a BlackBerry user, we’d love to hear your thoughts on what you’d likely pick as your next smartphone. Will it be iPhone, Android or BlackBerry? Heck, there’s even Windows Phone 7 on the horizon. Sound off below!

Jailbreak Your iPhone 4, Get FaceTime to Work Over 3G with My3G

One of the coolest features on the iPhone 4 is undoubtedly FaceTime. Well, at least that's the case if you...