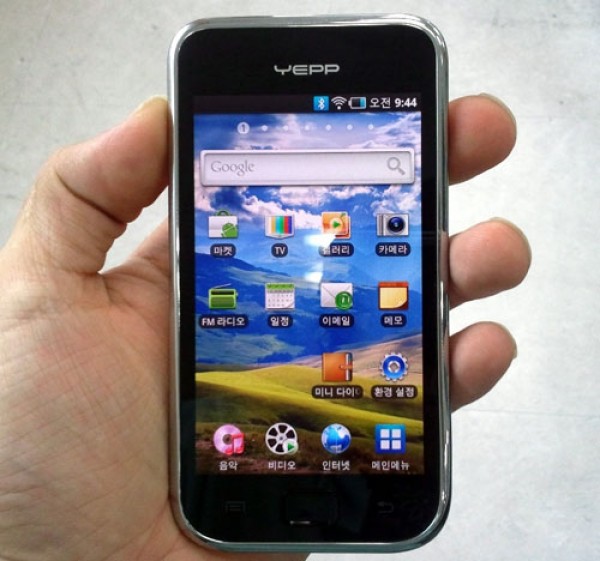 We knew that Samsung has big plans for their Galaxy S phone and the upcoming Samsung Galaxy Tab. We also knew that they intended on releasing a media player of some sort, the YP-MB2, but it wasn’t until now that we’re seeing the thing in the flesh. Or plastic.

Surprise surprise, the YP-MB2 looks like a Galaxy S! If you weren’t expecting that, then you need to do some more research, as Samsung is going the Apple route and making all of their devices look the same, and incidentally, very similar to iPhone design aesthetics. The YP-MB2 will basically be a Galaxy S phone, just without the phone hardware. The MB2 media player will feature the same 4-inch Super AMOLED display, 1GHz Hummingbird CPU, 6-axis motion sensor, etc. that we find in the Samsung Galaxy S Android smartphone. We’re hearing that it’ll be available in 8GB, 16GB, and 23GB models. It’s basically the iPod Touch of the Galaxy S line up. And, just like the iPod Touch, if you have an iPhone, you really don’t need one of these things if you have a Galaxy S.

Expect this PMP to sport the same TouchWiz UI seen on all of the Galaxy S devices, as well as the Tab, ensuring a seamless transition going from one device to another. The TouchWiz UI, also painfully similar in look and feel to that of the iPhone, provides some nice customizations to the Android OS in widgets and overall polish with the UI. The PMP will likely be running Android 2.1, but the Android 2.2 Froyo update for the Galaxy S line isn’t too far away, so we could actually see the device shipping with Android 2.2.

Samsung is planning to announce the device on August 11th if rumors hold true, so hopefully we’ll hear when this thing will officially hit the States. I don’t think I’ll be getting this device, but I’m glad to see a decent Android PMP coming to market, even if it doesn’t hit the US. For those who’d like an iPhone-like device, or are coming from an iOS device, the Galaxy S devices will be a good fit. Oh, and the, the YP-MB2 will have better multi-tasking implementation than Apple’s “fast app switching” technology.

I definitely needed to hear this bit of news that The Adam tablet computer, from the Indian start-up Notion Ink,...