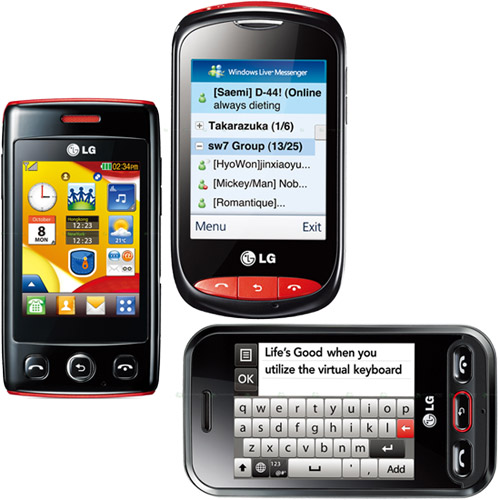 LG definitely likes what Samsung is doing with its Cookie series, thus they’re launching a series of their own called “Wink.” Right from the bat, LG unveiled three phones – Wink, Wink Style and Wink 3G – all sporting the ever-popular all-touchscreen form factor. In addition, each of the phones rocks a media player, FM radio, 3.5mm headset jack and a microSD memory card slot, making them ideal for on-the-go music playback. Moreover, there’s the social networking integration right on the cartoon-styled user interface, allowing Wink phone users to keep up with their buddies wherever they happen to be.

As for the differences between the three devices, the Wink rocks a 2.4-inch screen, Wink Style – 2.8-inch one, while the Wink 3G comes with a 3G radio and push-email capability.

The LG Wink series will be available in an array of colors in Europe and the Middle East starting in mid-August followed by Latin America, CIS and select Asian countries, including China, in the third quarter.

LG is launching a new Android-powered smartphone in its own backyard. The name of the phone is Optimus Z, and...