The QWERTY-packing Motorola DROID 2 is the next Android handset slated to land at Verizon, and it’s one of the most anticipated smartphones of the year. The side slider has been detailed, benchmarked, spotted as a dummy, videoed, and spotted in the wild. Almost everything that we need to know about this handset, except the launch date, has been revealed. Today, we are seeing more pics of the Android hotness in the wild. 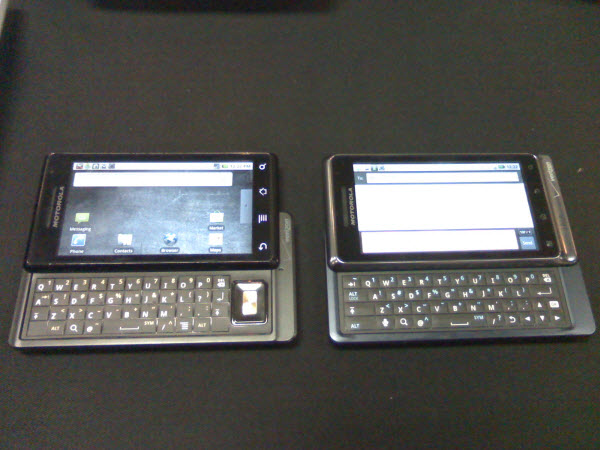 In this latest leak, this highly anticipated Android handset is photographed both up close and personal and sitting pretty next to the original Motorola DROID. In addition to some eye candy, the images once again highlight the newly designed keyboard and subtle styling changes that differentiate this current Android model from its predecessor. A look and feel that leaves current DROID owners wishing they had not signed that two-year contract when Verizon’s launched their first Android handset late last year.

If the pre-launch excitement surrounding this handset is any indication, the DROID 2 promises to be another hot seller for the Android-focused Verizon Wireless. With the Motorola DROID X and the HTC DROID Incredible already available, the wireless carrier is in the enviable position of currently offering not one, not two, but three premier Android handsets in the upcoming months – two of which happen to come from Motorola.

With demand for these Android-powered handsets growing at an astounding rate and sales skyrocketing, Android is poised to give Apple and its iPhone 4 a run for its money. Let’s hope Motorola has ample inventory of their upcoming smartphone in production. Let’s also hope Verizon is prepared to meet this demand when the handset reaches its rumored launch date later this month.

It would be a nice change to write about a successful launch with an over abundant supply of handsets instead of the all-too-common smartphone shortage that seems to be the trend this summer. Anyone else waiting with bated breath for Verizon to come clean and make this handset launch official?

Rdio is trying to one-up Rhapsody, MOG and mobile music services by slamming some social networking features with its unlimited...