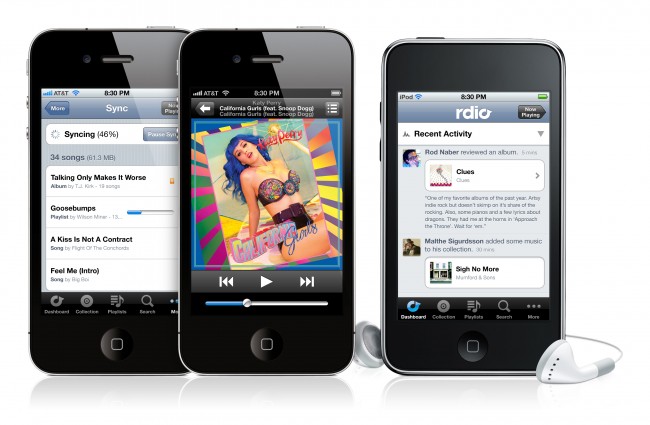 Rdio is trying to one-up Rhapsody, MOG and mobile music services by slamming some social networking features with its unlimited streaming and downloading of music to smartphones.

Like the other music services, Rdio enables users to stream tracks on the desktop or the phone from a catalog of over seven million tracks including the top four labels and multiple independent bands. You’ll also be able to download tracks to your smartphone or other mobile device for offline music access. This could come in handy because Rdio has apps for Android, BlackBerry and Apple iPhone (I’m putting the Android version through the paces and I’ll give you some more thoughts in a few days).

A few cool things about Rdio is that you’ll be able to match your iTunes or Windows Media libraries in the service’s players (if it has the tracks), so you probably won’t be missing much of the music you love.

Unlike services like Spotify, Rdio places a heavy emphasis on social networks. You can tie in your Facebook and Twitter to help you discover new tracks, as well as let others know what you’re listening to. You’ll also be able to follow other people, make friends and try and discover new music that way.

“Rdio users love how simple it is to use,” said Drew Larner, CEO of the company, in a prepared statement. “Imagine having an unlimited online jukebox which shows you what others are listening to – you can enjoy any song you want, as many times as you want, whenever and wherever you want. The social nature of Rdio means you can discover new songs every time you visit Rdio.”

The service was created by the founders of Skype and it was an invite-only service until today. The service costs $4.99 per month for Web-only access, $9.99 a month for unlimited web and mobile access and you can buy tracks for about a dollar per track.