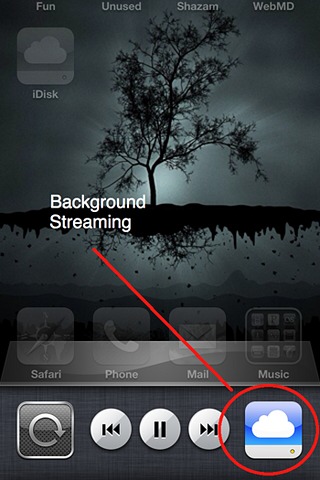 One feature most iPhone, iPad and iPod touch users are hoping for is iTunes on the cloud. The ability to stream your music library wherever you are, especially if your enormous collection is just too much for any of the current capacities of Apple’s iDevices, is what audiophiles are lusting for. Now we’re getting a similar feature, one that wasn’t publicly advertised by Apple in its latest update of iDisk. Unbeknownst to most users, and apparently buried within the release notes, Apple has enabled background music streaming from the iDisk application.

First, in order to use iDisk, you’ll have to be a MobileMe subscriber. The online data storage service from Apple has always allowed you to play music if you put your tunes on it, but it would shut off if you left the application. Now, it happily streams your tunes straight to your ears while it runs in the background. Apple is now also allowing public sharing of these files with no restrictions. Both of these features are sure to set off alarms amonst the record labels who require licensing for music streaming, but the way in this feature works is a little tricky. You are listening to your own music for which you paid and stored on an online storage service.

While this seems like a great feature, and perhaps a neat way of getting additional tunes to play through your iPhone or iPad if it’s already brimming with all the music it can handle, it’s still not what we’re hoping for with a cloud-based iTunes. In order to get music onto your iDisk, you’ll have to select and manually add them to your iDisk rather than the easy syncing option you get through iTunes.

Does this new feature portend the coming of something bigger and better from Apple? Perhaps, but before we get too excited, let’s not forget the recent news that cloud-based iTunes could very well be delayed.

Android Comprises 33% of US Smartphone Sales, Leaves iPhone and RIM Behind

Is it any surprise to anyone that Android is very quickly dominating  the U.S. smartphone market? The Apple iPhone is...