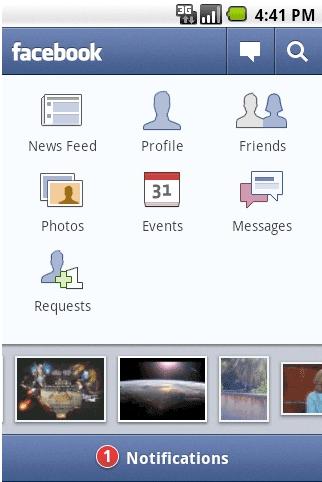 Facebook for Android has finally been updated, and it now seems easier to navigate and much more pleasant to use. From the user interface changes to some of the new features added, Facebook for Android really needed this. I used to guage the quality of Android apps versus iPhone apps based on ones like this–apps that appear on both markets. Facebook was hideous on Google’s mobile platform, and almost everything you wanted to do would just toss you out onto the smartphone’s browser, whereas you could do almost everything you wanted in-app for the iPhone. Now things are a bit better thanks to Eric Tseng leaving Android for Facebook.

The first thing you’ll notice is that the default page for the app is the home page when you open it up, but it’s a bit cleaner and it has a few new additions. You’re now able to browse media, such as pictures and videos, straight from the home screen as they’re all lined up along the bottom. The only problem is that sometimes you don’t know what you’re looking at, since the thumbnails are quite small (even on the EVO 4G’s screen). It’s tough to say whether that little image or video is worth looking at.

Other changes is the notifications: instead of an icon for it, it’s now a bar on the bottom of the screen that you can swipe up to check your notifications. You can also create status messages and perform searches from the home screen with the bar on top; it’s very much designed like Twitter for Android. Small changes like these really make a big difference in overall usability and checking your Facebook account on your Android handset is less of a nightmare.

If you’re an avid Facebook user, but you’ve avoided the Android app like the plague due to its limited functionality and feature set, this version is definitely worth a go.