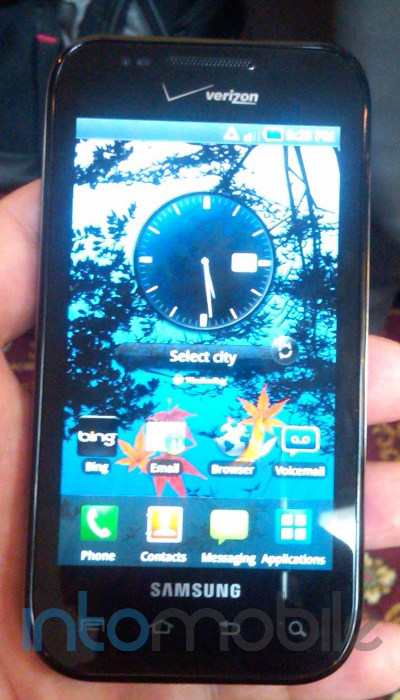 While the world focuses on the impending release of the Verizon Motorola DROID 2, Verizon Wireless and Samsung are quietly preparing the Fascinate (Verizon’s Galaxy S variant) and the Gem, two hot, new Android handsets. Thanks to our tipster, we were able to score some early details and a few close-up photos of these pre-release handsets cavorting in the wild. 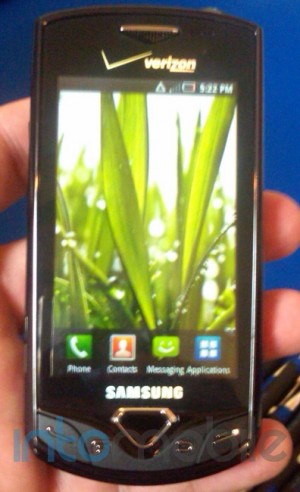 Up first is the Samsung Fascinate, a handset that should be familiar to Android fans as it is the Verizon version of the  Galaxy S. We are well acquainted with the other variants of the Galaxy S, including the T-Mobile Vibrant and the AT&T Captivate. Similar to its  brethren, the Verizon Fascinate sports a 4-inch WVGA Super AMOLED display, a 1GHz Hummingbird processor, a 5-megapixel camera with 720p HD video recording, and Android 2.1 with Touchwiz 3.0. Samsung takes a slightly different styling approach with the Verizon version by replacing the standard dark framing of the Galaxy S with a metallic body that adds a bit of flashiness to this sleek and sexy handset.

While details on the Verizon Fascinate are abundant, the Samsung Gem is a relatively unknown Android offering. The Gem appears to be an entry-level Android handset with a slightly smaller display and Samsung’s TouchWiz 3.0 UI overlying the stock Android OS. The Gem is expected to launch with Verizon early in September; while the Fascinate is slated to launch at the end of that month. No word on pricing but we expect these two Android offerings to come in with a price tag at or below the current $199 of the Motorola DROID X.

Though both the Fascinate and the Gem look ready to roll out today, Verizon is presumably pushing back the launch of these two Android handsets until September so it can make room for the rumored August 12th launch of the DROID 2.

While waiting anxiously for September to roll around, Samsung fans can get their fill of the other Galaxy S variants by checking out our reviews of the T-Mobile Vibrant and the AT&T Captivate.