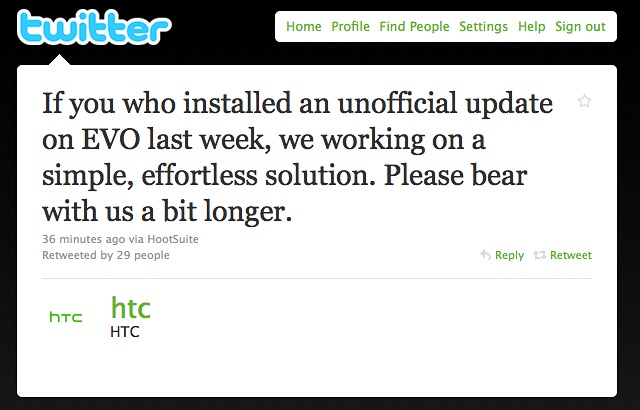 HTC is working to get early adopters of the Android 2.2 update for the EVO 4G back on the correct software version. Whenever we catch wind of a new update, especially one that’s leaked, it’s extremely tempting to jump right on it and get ahead of everyone else. However, it can come at a price. In this particular case, the version leaked from HTC’s own site last week was not the final version of the Froyo update for the EVO 4G despite the software version matching the one listed on Sprint’s website. Those who grabbed that update were unable to upgrade to the official OTA update.

Of course, this doesn’t keep the early adopters from wanting the official version if for nothing else than peace of mind. A few days ago, HTC announced that it was working on getting those users “back on the official track.” Today, the Taiwanese manufacturer said that it’s taking just a bit longer, but a simple update solution is being worked on and should become available soon.

If you’re rockin’ the unofficial version, let us know how it’s worked out for you so far. Based on my experiences, I haven’t had a single issue – none whatsoever. And in NYC, I’ve seen WiMax download speeds of up to 9Mbps and upload speeds topping out at 2Mbps on my EVO 4G. If you’re on the official OTA version, feel free to share how you like it so far. We’ve been hearing and seeing mixed results from users across the web!

Expect more leaks and previews like this until Verizon actually launches the Motorola Droid 2 actually comes out. Another leak...