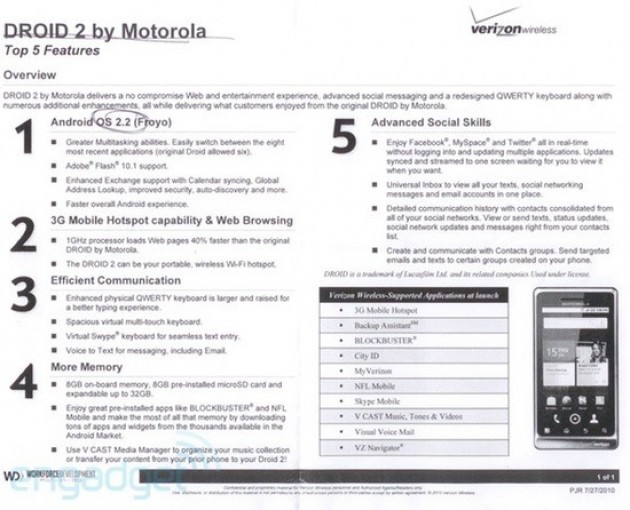 Expect more leaks and previews like this until Verizon actually launches the Motorola Droid 2 actually comes out. Another leak has come down the pipes today, showing off the newest of the Verizon Droid lineup’s top five features. What makes the top five? Read on, or look up to find out! We suggest you read on.

Number 5: Advanced Social Skills. When Android 2.0 (Eclair) was released, they kept up with their promise when they said that the OS would be come more social. Social it did get, and we soon saw the Facebook application that gave you the ability to sync all of your FB friends into your contacts. Twitter has the same option upon logging in for the first time. On top of that, Motorola’s slightly tweaked UI – MotoBlur – for the upcoming Droid 2 keeps social integration, ensuring an even more connecteder experience.

Number 4: More Memory. Only recently have Android phones begun to see greater internal storage, and the Motorola Droid 2 keeps up with that tradition, with 8 GB on-board storage. Not only that, there’s still the usual MicroSD card slot that you can expand up to 32 GBs, giving you a total of 40 GB of storage in total. The only other device that can best this amount is the Samsung Galaxy S, or any of its variants, which can be expanded to a total of 48 GBs of storage.

Number 3: Efficient Communication. The Droid 2 comes with a better QWERTY keyboard than that of its predecessor. Motorola damned the D-pad, and replaced it with four directional buttons. This helps to give the keyboard room, and from what we’ve seen of the new keyboard, we definitely believe it will be a much more enjoyable typing experience. But it doesn’t stop there. The Droid 2 also has the awesome multitouch keyboard found on the Droid X, as well as the Swype keyboard pre-installed, which will allow you to type your word without having to lift a finger. Oh, and let’s not forget the voice-to-text feature that works throughout the entire Android OS.

Number 2: 3G Mobile Hotspot capability & Web Browsing. While Froyo supports a 3G mobile hotspot as a native feature, Verizon thought it might be better if they charged you for it, like they have with the Droid X. That said, it’s cheaper than the $30 fee you have to pay for the Sprint EVO 4G. Instead, Big Red shaved off $10 so you’ll only be paying $20 for it. While we wish it would be free, it’s still a good deal.

The Droid 2 also packs a 1GHz CPU, which has achieved some impressive benchmarks, and when you couple that with Froyo’s JavaScript V8 engine, which is also found on Google’s desktop browser, Chrome, you have one the snappiest web browsing experiences that you could possible find on a mobile device.

Number 1: Android OS 2.2 (Froyo) As if we needed any more confirmation that Verizon and Motorola will ship the Droid 2 with Android 2.2 Froyo OS, here it is. Froyo makes the entire OS overall faster, supports Flash 10.1, a slew of new Exchange features, and more. If you want a full rundown of everything Android 2.2 will be offering you (sans native and free 3G Mobile Hotspot), check out my painfully detailed overview of Froyo, here.

If you had the chance, would you swap a couple of these features around? What’s most appealing about the Droid 2 for you? Sound off in the comments!

Verizon and Google are allegedly in talks for a deal that may undermine net neutrality according to sources privy to...