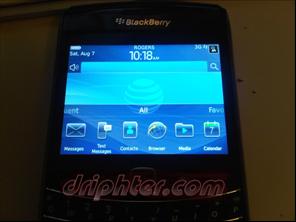 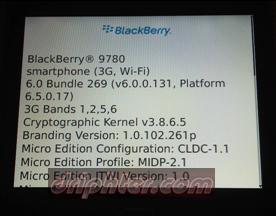 A few shots of the upcoming BlackBerry 9780 have come up, showing AT&T branding loud and proud on the desktop wallpaper, and including support for a wide range of bands in the About screen, meaning this thing could go to just about any GSM carrier. From what we know about the 9780, other than the fact that it looks on the outside exactly like the existing Bold 9700, the unreleased smartphone runs OS 6, has 512 MB of RAM, and a 5 megapixel camera. The new operating system has a lot of cool stuff, like a Webkit browser, updated user interface, and a new social networking/feeds application, but surely there’s more to the BlackBerry 9780 than that.

For awhile it seemed like the 9780 would have a similar relationship to its 9700 predecessor as the 9300 did to the 8530, but since we hear the 9700 is getting OS 6, I can’t help but wonder what the 9780 is bringing to the table. –80 is a new designation for BlackBerrys, so one would think there’s some kind of new feature it’s identifying. There was talk that the next Storm would have portable hotspot capabilities, which would be an awesome addition on other handsets too, but that’s probably wishful thinking talking.

Ultrabrief: Video: Negotiating a hostage situation with an iPhone on AT&T’s network

How would you handle a hostage situation if all you had to communicate with the bastard who stole your girlfriend...