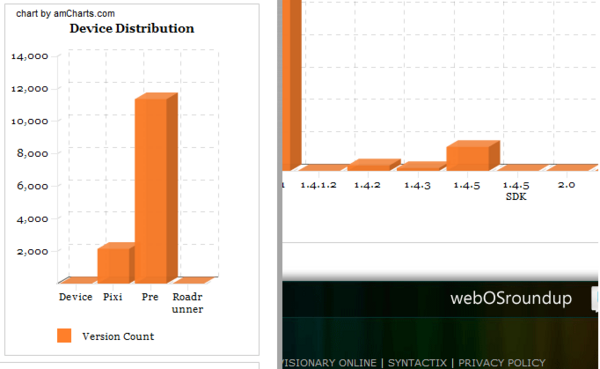 An unknown device with webOS 2.0 and a codename of Roadrunner was spotted in the usage stats for a popular Foursquare app available for the Palm Pre and Pixi. The app developer Zhephree stumbled on a single entry for the unknown Roadrunner device and new column for webOS 2.0 while examining the adoption rate of version webOS 1.4.5.

Details are sparse on the device as the stats are anonymous but it is most likely a phone. The device did not generate a new screen resolution entry so it must have a resolution that matches the current crop of devices. Despite our wishful thinking, the 320×400 and 320×480 resolutions of the Pre and Pixi are not compatible with the larger display of a tablet.

While this Roadrunner discovery is intriguing, the dev points out that the code for Foursquare is open source and can be hacked to change the user agent string that is presented to the metrics tool for his app. Though possible, this scenario is unlikely as the process of modifying the user string within the application’s Metrix JS library is doable, but difficult. Why would anyone invest their hard earned time in hacking a Foursquare app on webOS when there are bigger and easier targets to hack?

It is also possible that an emulator generated this entry. The emulator could be hacked or could be running webOS 2.0 from within Palm’s campus. Last but certainly not least, it is possible that there is a prototype webOS 2.0 device undergoing testing by a Palm employee who happens to enjoy Foursquare. Given the recent promise of new hardware from HP/Palm, it is quite possible that this is the first sighting of an actual webOS 2.0 device in action. Anyone care to speculate on this intriguing tale of devices, displays, and discrete Foursquare check-ins?

Looks like that old Apple TV "hobby" of theirs is actually going to become a more core part of the...