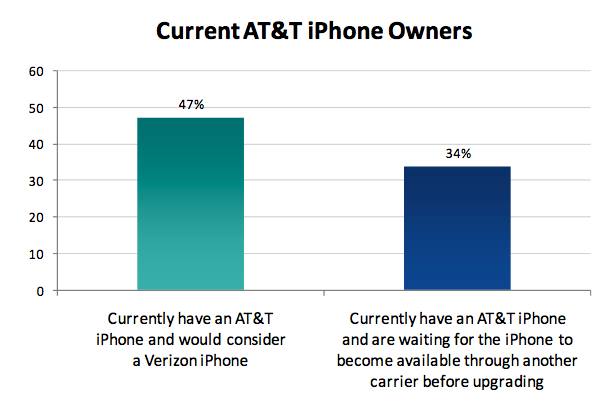 The iPhone has been an AT&T exclusive in the US for time immemorial (which, in the mobile world, translates into a little over three years), but that exclusivity will soon come to an end, with Verizon rumored to be launching an iPhone of their own in the near future. Big Red, with their self-proclaimed superior wireless network, might be able to put some real hurt on AT&T if/when the Verizon iPhone becomes a reality. Today, a new study indicates that a significant chunk of current iPhone users on AT&T are waiting to ditch their carrier for an alternative Apple smartphone carrier.

The numbers involved here aren’t all that surprising, but they sure are significant. According to the study from research firm Morpace, something like 1 out of every 3 AT&T iPhone customers are waiting for the handset launch on another carrier A solid 34% are look to jump ship, while 47% of current AT&T iPhone customers are at least willing to consider a Verizon variant of their handset of choice. These kinds of figures should have the higher-ups at AT&T at least a little worried about the carrier’s bottom line when Apple starts reaching out to other carrier partners for its iOS-powered smartphone. 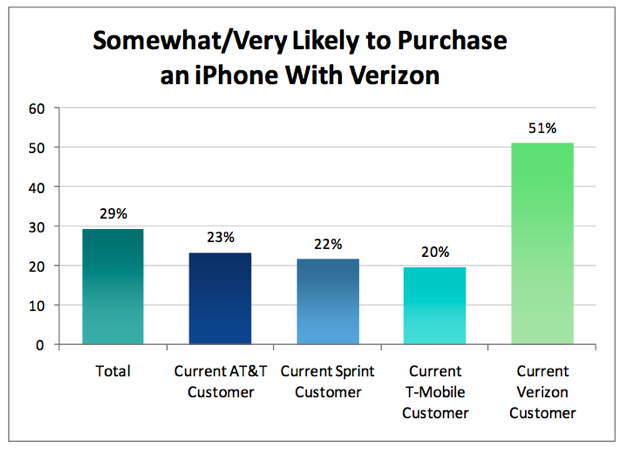 The survey also breaks down customer intent by carrier. Among T-Mobile customers, 20% are “Somewhat” or “Very Likely” to go to Verizon for an Apple smartphone. Sprint and AT&T have 22% and 23%, respectively, of their current subscriber base thinking the same thing. And, the icing on this cake is the 51% of current Verizon customers that have their sights set on a handset powered by iOS. Can you say, “high demand”?

What’s more interesting about the potential impact of an iPhone on Verizon is the affect the Apple phone will have on Big Red’s other smartphone offerings. As it stands, Verizon lays claim to the majority of the most compelling Android smartphones currently on sale in the US. They invest a lot of resources into marketing Android phones, like the Motorola Droid X and Motorola Droid 2. Seeing as how iPhone (or, more accurately, iOS) and Android are direct competitors, nay, arch rivals in the mobile space, we have to wonder how if Android will take a back seat to a newcomer Apple phone. Especially if it ends up being more powerful than the iPhone 4 from AT&T.

Keep in mind, though. The CDMA iPhone that’s rumored for Verizon could be solely intended for China.

The survey, which was conducted as part of the Morpace Omnibus, polled 1,000 iPhone users from July 15 – 20. Read the entire report by downloading this PDF.

There was a bunch of news this week that could have long-reaching consequences and no story was bigger than the...