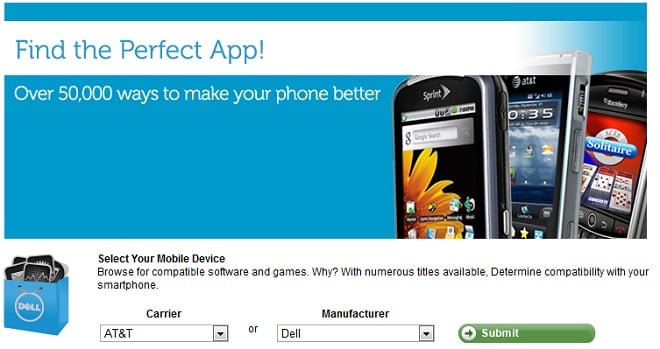 In a bit of an intriguing move, Dell has opened the doors to its own mobile app store and this will provide programs for Android, BlackBerry, webOS, Symbian and Windows Mobile.

The store offers support for at least 11 carriers and it boasts that there are more than “50,000 ways to improve your phone.” The content is being powered by PocketNow and it accepts credit card for payments and PayPal. It appears that you can only buy the apps and then transfer them over to your phone via a computer, as I’m not seeing an option for over-the-air purchases.

While playing with the Dell mobile app store, I ran into an odd occurrence: I typed in “AT&T” as my carrier and chose the recently-released Dell Streak to see what’s good with it.

I was hit with, “Applications for your device are available for download only from the Android Market application on your device.”

That’s odd, I thought, but then I remembered that AT&T doesn’t allow its Android phones to download apps outside of the Android Market. So, it looks like Dell’s flagship mobile phone right now can’t access the Dell mobile app store. Lame.

I then went to see what I can download for the Motorola Droid X on Verizon and was met with multiple options.

It’s an interesting move by Dell because the company knows that it has to adjust its businesses in order to stay relevant in a rapidly-changing computing environment. I don’t think the Dell mobile app store can fully compete against the Apple App Store or Android Market but it’s becoming clear that there’s room for other multi-platform app stores.

Getjar is the most famous example of a multi-platform approach and the independent mobile store already has seen more than 1 billion downloads. While measurements are a bit sketchy, it is likely the second-largest mobile app store in the world behind Apple App Store.