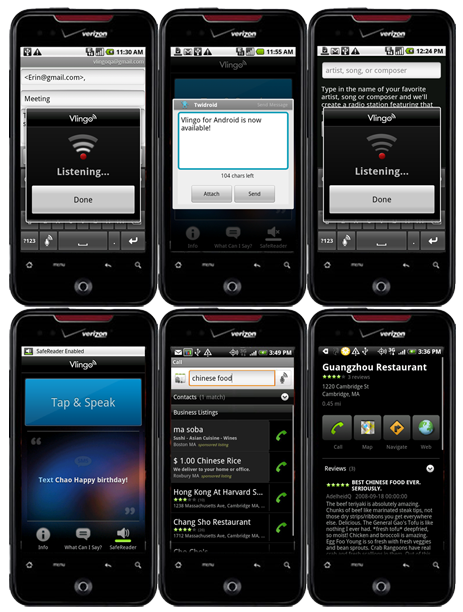 Vlingo, developer of a popular Voice command application for a wide variety of mobile platforms, responded to Google’s new Voice Actions application by offering its Android application for free. Vlingo points out in a blog post that its voice-product overlaps Google’s Voice Actions in many areas and offers similar functionality. To compete with the Google application, Vlingo is now offering its Android version for free so Android users can effectively compare the feature-sets of the two products.

Vlingo points out that its application offers a few advantages over the competing offering from Google. Vlingo hints that Google has a vested interest in promoting its own services and content while Vlingo, as an independent developer, can mix and match services and mashup content from Google and other sources.

Vlingo includes a few features that are not present in Voice Actions including SafeReader which reads your incoming texts and email messages. Vlingo is also available on other platforms such as the iPhone and the BlackBerry and, most importantly, on multiple versions of Android. As attractive as Google’s Voice Actions for Android may be, it is only available for Android 2.2 users.

So Android users, what do you think? Will you use Vlingo over Voice Actions for Android now that Vlingo is free? Also, what do you think of Vlingo’s move to discount its app and make it free? To me, it speaks volumes about a company when it tries to compete in this situation and not merely bad mouth its competition.

Apple’s next gen wireless antenna to include Liquidmetal technology

The amorphous metal alloys developed by Liquidmetal Technologies may be used in the design and development of Apple's next generation...