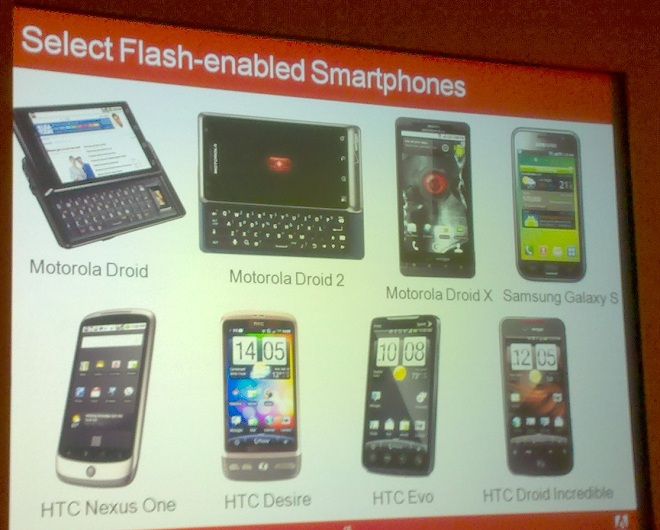 If you listen to Apple tell it, Adobe has been “lazy” about its mobile Flash strategy and that’s why the full version of the ubiquitous web technology has yet to hit multiple mainstream devices yet. At its San Francisco headquarters Monday, the company held a summit for mobile journalists to dispel this notion and to outline its plans for Flash on smartphones.

The company focused on Android, which makes sense considering the Flash 10.1 is available for multiple Froyo devices like the EVO 4G, Nexus One and the Motorola Droid (kind of). Adobe said it has been working with Google since November of 2008 to bring a full version of Flash to smartphones.

It has taken a long time because Adobe said it has taken a lot of effort to re-architect Flash to properly work on a smartphone. That includes using hardware acceleration to enable acceptable performance (Flash Lite users can attest to how a poor performance can sour an experience), battery life and a host of other issues.

For example, the company has integrated multitouch gesture support into its mobile version of Flash. This could be very important because when you’re watching Flash content in a browser and use pinch-to-zoom, you definitely want that content to zoom consistently with the browser.

The core issue for Adobe was managing the performance and battery life, which are two oft-cited reasons for why Flash isn’t right for mobile phones (these are what Apple CEO Steve Jobs noted). This is why Flash is only available on Android 2.2 devices, as the JIT compiler in Froyo enables Flash to run at a high level without impacting battery life too much.

As for battery life, Adobe is doing things like fine-tuning its “garbage collector” for memory and throttling video and audio if it leaves your window of view.

Adobe will be working with companies like Research In Motion, Nokia Palm and others to ensure that official versions of Adobe for smartphones get out there at a high level of quality. But the company knows that communities will wind up porting version on their own to devices that may or may not have the hardware or software optimization to properly handle it.

This may lead to some YouTube videos showing extremely poor Flash performance on smartphones but the company is confident that these will be overshadowed by the official version. This is also why Flash for Android will have some hardware requirements, so don’t expect to get an official version on lower-powered devices like the HTC Hero.

Moving forward, the company is focusing future version on having tablet support, including a multitouch API, and 3D support (eventually).

In the battle against Apple, Adobe appears to be taking the long-term approach. If the company can get a fantastic version of its Flash on Android, BlackBerry, webOS and other platforms, users will expect this when they’re surfing the web on the go. It could make the iOS browser look woefully out of date.

This could get Apple to relent on its Flash position, but time isn’t on Adobe’s side. Apple iOS already has 100 million users and publishers are eager to tailor their content for these users with HTML5 – this HTML5 content can also reach Android and most other smartphone users, too.

Of course, some would argue that in-browser games and apps don’t make as much sense on a smartphone due to the smaller screen size and the predilection for. With its AIR platform, Adobe has this end covered as well.

The Adobe AIR for Android platform was showed off in pre-release form at Google I/O and the company has already seen more than 7,000 developers sign up. This enables developers to create out-of-browser apps that can access the camera, geo-location services, SQLite, file system access and more.

We saw a few examples of these apps and they looked impressive: you’d be hard-pressed to notice the differences between these AIR apps and the native Android ones except for one thing: It cannot yet do background processing. Adobe said it is looking into this issue but it wanted to focus on the user experience first and foremost with this first Android AIR release.

Developers will be able to create these apps as a normal Android app that can go into the Android Market (as a .apk file) or as an AIR file for out-of-market downloads.

The hardware and software requirements will be consistent with the Flash player and because AIR and Flash have a shared code base, devs can continue to look forward to improved capabilities from AIR.

“As we continue improving Flash … those will also benefit AIR and you’re going to see more and more of that as we move forward,” said Anup Murarka, part of the mobile device team.

Look for Adobe AIR 2.5 with support for Android to hit around the fourth quarter of the year.