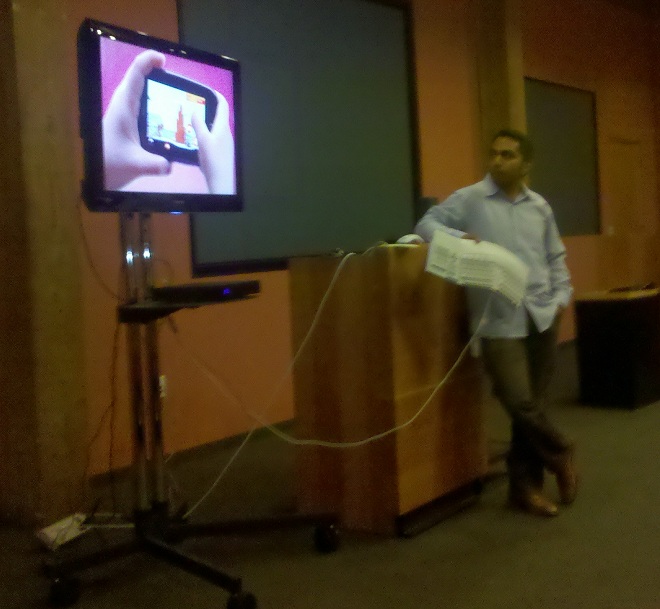 Remember Google TV? We took a look at this during Google’s I/O conference a few months ago and Adobe showed us some more aspects of this cool-looking digital television service.

Google TV will be powered by Android 2.1 and it comes with a Chrome browser with Adobe Flash 10.1 built in. Essentially, it wants to bring all the online content to your big screen.

Why? Well, despite what all your hip Foursquare-using friends may do, most Americans watch the majority of video on TVs. The average family watches about 150 hours of video on a TV per month, Adobe said.

We saw a demonstration of Google TV (on non-final hardware) and the Adobe Flash Player held up well. We saw live streaming hoops at high-definition and it looked good. The YouTube Leanback was smooth and the BBC video even did the pre-video ad (maybe annoying but it’s an important part of the video ecosystem).

But this isn’t IntoTV and some of the mobile-centric aspects of Google TV caught my eye. Adobe just used a keyboard and mouse to interact with it but Google has already shown that customers will be able to use Android handsets to control it.

This is where things got interesting, as Adobe also intimated that is has seen prototypes of where things can go. For example, an Android phone could eventually be used like a log-in device with Google TV – you walk into your living room and your content could “auto-magically” play on the device.

The Android Market should also play a major role in Google TV, as any app that doesn’t use a phone functionality will work with this. That means you’ll soon have some Pandora on your TV with ease and I can’t wait to see what happens as more APIs get released.

So, readers, I know the Google TV stuff is a little outside our mobile roots but what do you think of us covering this stuff?

At Long Last, the HTC Droid Incredible for Verizon is Back in Action

Since its release back in April, the Droid Incredible by HTC has been rather elusive. The Android device for Verizon...