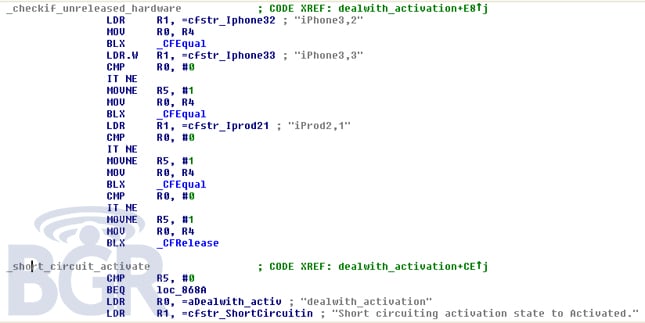 The Verizon iPhone rumor mill keeps churning, but as we move along it seems like more evidence continues to pile on, too. It’s no surprise to anyone that many Verizon customers are wanting the Apple smartphone. Hell, even AT&T iPhone customers want to jump ship for greener pastures: up to 34% of current iPhone owners want to head to Verizon. So perhaps this newly found information from an Apple source might start driving this rumor even harder.

Apparently, Apple is beginning to field test its latest smartphone and the iPad compatible with the Verizon network. BGR says:

Way down deep within iOS 4 is a pretty intriguing block of code. Our source says that the code queries the device, and if the device is either a CDMA iPhone or iPad 2, the device will auto-activate, thus bypassing the need for iTunes. We’re told this block of code has appeared every year consecutively before a major iPhone / device release, removed right before launch.

This allegedly allows carriers and Apple partners to test hardware without having to activate it through iTunes. The CDMA iPhone, which could likely be for Verizon if it ever materializes, bears the platform code N92AP and the platform code for the next generation iPod touch is N81AP.

If these rumors turn out to be true, it could very well explain the surge of new hires that Verizon plans on later this year. And it also explains AT&T’s hubris and necessity for explaining that it will do just fine if it loses exclusivity of any major piece of hardware.

Now, since Verizon is prepping its LTE network and looks to go live in several cities in 2011, it’s likely that an initial Verizon iPhone won’t be LTE or 4G capable until the network starts to see real expansion in 2012. So if you were secretly hoping for a blazing fast Apple smartphone on Verizon’s network, it might not be happening for a while. On the other hand, if you’ve been living in a city like San Francisco, the Apple smartphone would seem a million times faster on a network that actually works.

BlackBerry Torch Sales ‘Underwhelming’ According to Goldman Sachs, Everybody

RIM needed a BlackBerry miracle. Its market and value share are being slowly eaten up by the iPhone and Android....