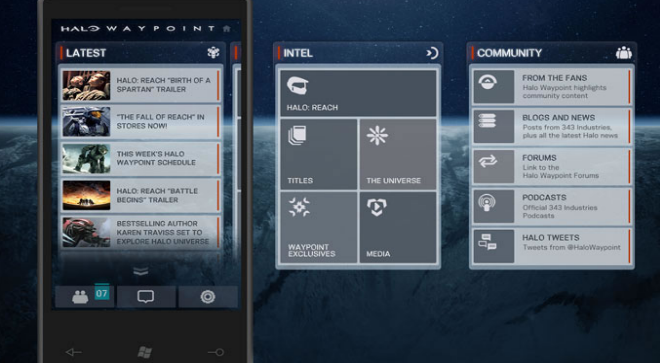 At the 2010 GamesCon event that took place yesterday in Cologne, Germany, Microsoft officially announced that they’re going to have between 50 and 60 Windows Phone 7 games at launch and that one of those titles would be a game based on the Halo franchise. A Microsoft spokesperson added that “additional titles will be announced between now and the Windows Phone 7 launch this holiday season; once the phone launches, new XBOX LIVE titles will be added to the games portfolio every week.”

Shawn Hargreaves, a Microsoft developer who worked on XNA Game Studio, emphasized that with Windows Phone 7 you don’t really have to learn any complicated new tricks if you’re used to developing for XBOX. He went so far as to say that 97% of what XBOX developers are currently doing can be transferred over to Microsoft’s new platform.

Nathan Fouts from Mommy’s Best Games, developers of the award winning XBOX Live title Weapon of Choice, said “initially we weren’t looking at developing for WIndows Phone 7 until we heard it would use XNA and C#.” Because Windows Phone 7 uses the same developer tools that his studio was used to working with, Nathan handed over the job of porting Weapon of Choice to an intern who did the whole thing in just 2 weeks. Now they’re working on adding polish.

Microsoft’s got a lot to prove in the coming months and while many in the mobile community will be about as excited about Windows Phone 7 as they were for the first iPhone, with time, and proper execution, a potential snowball of hype could build that will see the platform become as popular as say Android is today. Personally, my early adopter days are over. I didn’t use Symbian until S60 3rd Edition, I didn’t use Android until 2.2, and I’m probably not going to use Windows Phone until at least version 8 or 9.

What say you, are the games a feature you’re really looking forward to or are you just fine texting and calling and browsing the web?

[Via: ZD|Net and Phone Scoop]

In a bit of pre-Gamescom excitement, Microsoft announced the first wave of Xbox Live game titles slated to hit Windows...