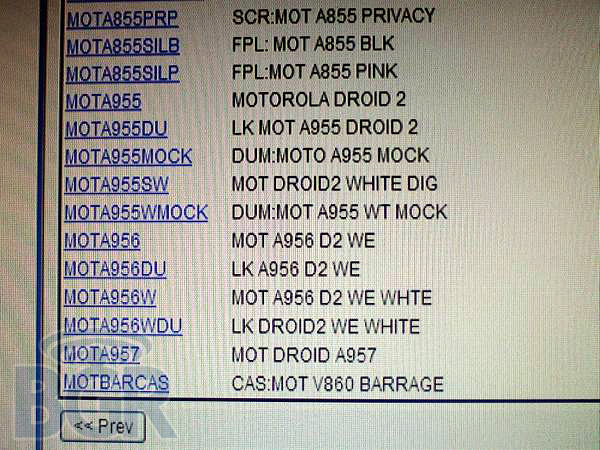 Verizon is showing no signs of slowing down when it comes to the its Android efforts, and it looks like its next World Phone might be a Motorola Droid. According to a number of leaked images, a new version of the Droid, what’s rumored to be called the Motoroal Droid Pro, will be a global capable phone. The model number is Motorola A957, but the smartphone maker is also allegedly working on a global capable version of the Droid 2, model number A956.

The Motorola DROID Pro, the handset with a 4? display, 1.3GHz CPU, and global roaming capability gets the model number A957, and is set for a November launch. Motorola is also apparently working on a more business-focused version of the DROID 2 with a World Edition global roaming feature, and it looks like that device will launch relatively soon with the model number A956. If that’s not enough, it also appears that the phone will come in two color choices, black and white.

Moving on to the Motorola Android slab device — it’s listed and we’ve found the model designation — MZ600. We aren’t able to definitively confirm at this time whether this is the Motorola tablet (unlikely just yet) or just the slab form factor device we reported on (much more likely). If it’s the slab touch screen Android phone, it should launch with Android 2.2 and also be a World Edition handset. It looks like there are over 170,000 of those devices on order from what we can see.

It looks like Sanjay Jha & Co. are also getting ready to release an Android tablet with the model number MZ600. But according to BGR, it’s more likely that this is a “slab form factor” device, which means something along the lines of a Droid X, than it is an actual tablet computer.

So now with the Verizon LTE and hardware roadmap leaked, is anyone getting even more excited for Big Red? What we’d love to see now, since so many iPhone users are badly wanting to switch carriers, is for that golden Apple smartphone to hit the nation’s largest carrier.

Dell to update the Streak to Android 2.2, skip over Eclair in the US?

The Dell Streak made a splash when it was announced in May and was regarded as a "must-have" for Android tablet...