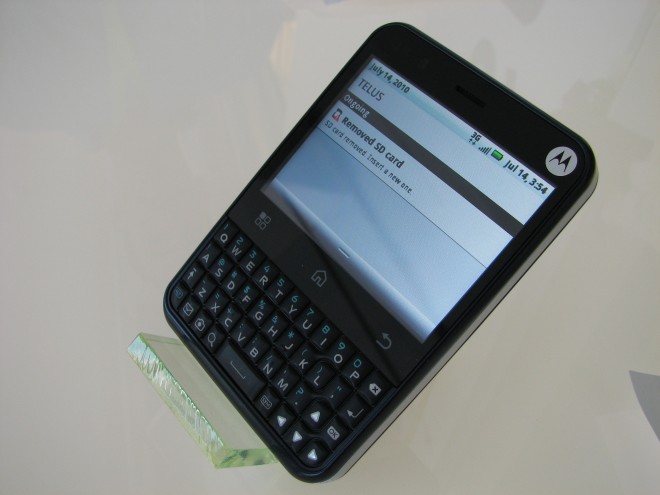 The Motorola Charm that’s  on the way to T-Mobile has just gone official on Telus. We got a chance to try it out, and it’s looking like it’ll be a decent entry-level smartphone, with a few unique tricks. For one, this is Motorola’s second phone with a rear trackpad (much like the Backflip), which functions identically as if you were touching the front. The new MotoBlur improvements let you resize widgets on the fly, without having to remove them and crossing your fingers that a larger version is available, and a quick contacts widget lets you send texts, e-mails, Facebook messages and more right from your home screen. The QVGA display and 3 megapixel camera keep the handset cheap, at a scant $29.99, so long as you’re willing to swallow a three-year contract with Telus. All of the other usual amenities, like, Wi-Fi , aGPS, and 3G are there.

The keyboard on the Motorola Charm didn’t feel especially ergonomic, but I’ve been spoiled by BlackBerry all these years. Android 2.1 on such a low-end device is a bit of a cruel joke for those who are buying, say, a Sony Ericsson X10 which launched recently on AT&T with 1.6; still, it’s good to see Android working its way down to more inexpensive phones. Now it’s just a matter of getting data plans down to something equally entry-level in Canada.

Head on over to Telus if you’re thinking of picking up the Motorola Charm, and be sure to check out our hands-0n video below.

Good news, the original Motorola DROID is back on sale with Verizon Wireless! After its recent removal from Verizon's online...