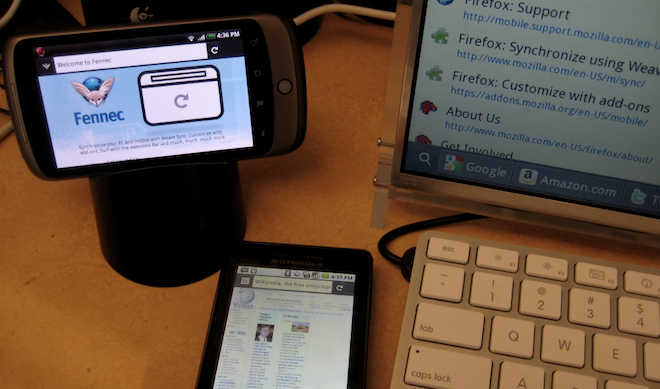 Matt Brubeck, from the Mozilla Mobile team, shared some updates on the status of Fennec 2 recently, including the tasty little tidbit that the release is destined for both MeeGo and Android mobile operating systems with a beta for Android due this fall. Fennec 1, which never really took off because it was only available on Nokia’s Maemo operating system, plus had dreadful performance, is getting an extensive under the hood rework. First there’s support for multiple processes coming, which Mozilla call “Electrolysis“. Instead of the browser being 1 resource hogging process, it instead breaks down the chrome, JavaScript, and content rendering into separate processes. If this sounds familiar to you then you’ve probably heard of Goolge Chrome, which does the exact same thing. Users can expect a more responsive application, and if something crashes then no big deal, everything will be alright.

The next big thing is called “Layers“, which is graphics accelerated rendering. No longer will the CPU be stressed with both rendering a website and handling the pinching, scrolling and whatever else it is you do with a page, instead the graphics processor (GPU) will be able to help out a little. This technique is utilized in Safari for the iPhone and as far as I know it’s also in the web browser on Google’s Android operating system.

Other new features include Firefox Sync, so you can have all your bookmarks and even open browser tabs be in sync between your computer and your mobile phone. Fine In Page, so you can … you know … find text in a page. Sharing links via Twitter, Facebook, whatever, will also be built in, which shouldn’t be too hard to do since Android has a robust sharing mechanism already built in. And finally support for multitouch, bringing the browser into iPhone of 2007 territory.

All this is fine and dandy, but seriously, who uses Firefox anymore? The once love browser has become the Internet Explorer of today. All the “technology leaders”, or “early adopters”, or whatever [insert obnoxious wanking gesture] marketing term you use to describe people who use the internet for more than 40 hours a week, are all using Google Chrome. And when it comes to mobile, WebKit has won. I’m not saying Mozilla shouldn’t compete, but they’ve got a hell of an uphill battle.

Clockwork recovery has hit the DROID X courtesy of Koush who made the exciting announcement on Twitter. Previously demonstrated as...