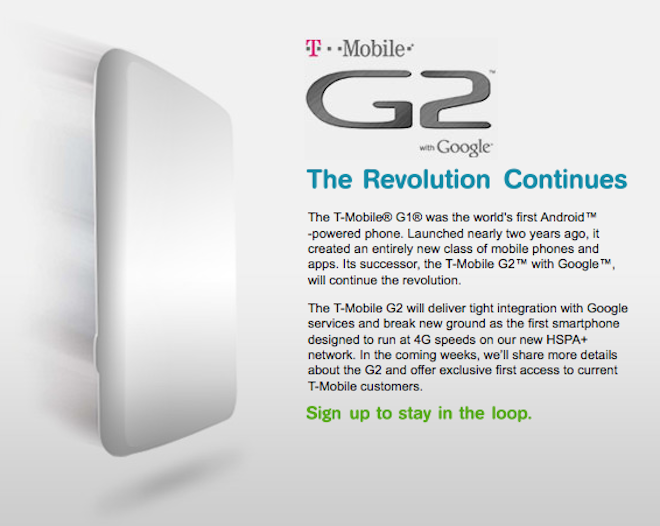 Remember how we’ve been waiting for T-Mobile to unveil their first HSPA+ compatible Android phone, rumored to be the T-Mobile G2 (codename: HTC Vision)? Well, today, Big Magenta has officially started teasing us with a mini-site dedicated to the G2. We’re told that the Android smartphone will be the first device from the carrier to support the 4G-busting HSPA+ data network. The teaser site offers geeks like us vague mentions of near-term launch windows and a non-descript image of the handset.

Following up on the T-Mobile G1, the inaugural Android smartphone that launched all those years ago (time really does fly), Magenta is apparently getting ready to push the G2 as the higher-spec and more refined successor to the original G1. We first caught wind of the G2 back when it was rumored to be the first HSPA+ phone from T-Mo and was said to be called the “HTC Vision.” We then heard that the handset’s codename was the “HTC G1 Blaze.” We then heard whispers that the G1 Blaze/Vision/G2 would be the culmination of the super-secret smartphone initiative that Magenta referred to as Project Emerald. The device will fully support the carrier’s mega-speed HSPA+ data network, which is available in almost 50 markets at this point, and covers 85 million Americans.

This is what the carrier has to say about the G2:

T-Mobile is proud to have launched the world’s first Android-powered phone, the T-Mobile G1, which captured the imagination of developers and consumers alike nearly two years ago.  Now, we are readying its successor – the T-Mobile G2 with Google.  Delivering tight integration with Google services, the G2 will break new ground as the first smartphone specifically designed for our advanced HSPA+ network, which delivers today’s available 4G speeds.  In the coming weeks we’ll share more details about the G2, including information on how current T-Mobile customers can get exclusive first access. Visit http://g2.t-mobile.com to register for updates.

At this point, we’re still looking at a rumored September launch window, as hinted at by the leaked T-Mobile roadmap that mentions the near-mystical handset.

We really don’t have much else to go on at this point, other than the facts that the G2 will boast HSPA+ connectivity and will feature the “With Google” flavor of Android OS. Oh, and let’s not forget that slide-out QWERTY keyboard that is clearly visible in this spy pic.

Hit up the teaser site to register for updates on the G2 here.