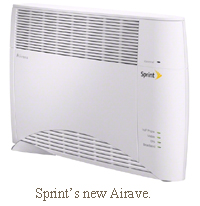 Sprint’s 3G Airave is now available from the wireless carrier but only select customers are allowed to order the device. Customers interested in the Airave access point must pass a litmus test to determine whether you would qualify and benefit from the use of the device. Each potential customer is reviewed independently and must demonstrate “specific in-building coverage issues”, according to Sprint spokesperson Mark Elliott.

If you pass Sprint’s test, the wireless carrier will hand over the Airave to you for free. The new 3G Airave will not require a monthly fee but will utilize calling minutes, data, and text messages from your monthly plan. In the end, though, the 3G version will be a lot less costly than its current 1xRTT counterpart which costs $100 upfront for the device and requires a $5 monthly fee.

Most people criticize femtocells and think of them as a crutch that the wireless carrier uses to avoid building out its network. While this may be partially true, there are many rural areas where network expansion is difficult due to the terrain and femtocell usage is a necessity. I, for one, live in one of those areas and would be without cellular coverage if it were not for the Network Extender in the basement of my house.

While I do support femtocells, I can not understand the carrier’s insistence on deducting minutes and data from my plan when I am using my internet connection to transmit the voice calls and packets of data. Anyone have any reasonable explanations beyond the obvious financial incentives?