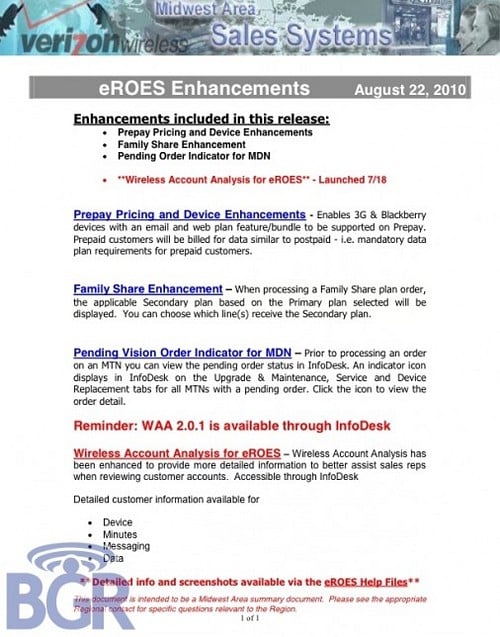 Getting a pre-paid BlackBerry has been a great option for many users since it does away with pesky contracts, and some of the plans are actually pretty damn good. However, if one could get a pre-paid BlackBerry on a massive network, like Verizon Wireless, then all the better. According to rumors and leaked documents, it looks like Big Red might be offering just that on Sunday, August 22.

The info as reported by BGR states:

Overview:  Enables 3G & Blackberry devices with an email and web plan feature/bundle to be supported on Prepay. Prepaid customers will be billed for data similar to postpaid – i.e. mandatory data plan requirements for prepaid customers. (only pulls up monthly plans, brochure view)

Overview:  Enable the offering of a Blackberry device and a email and web plan feature/bundle for Prepay customers  (defaults to monthly plans , brochure view)

It should go without saying that the $30 BlackBerry data plan is mandatory – and why would you want to use a BlackBerry without access to e-mail and BBM? – but it’s still a nice option if you want to go contract free and you don’t mind paying a little extra for the smartphone.

While you can go and get pre-paid BlackBerry handsets and plans with carriers like Virgin Mobile or Metro PCS, you’re likely to get better coverage with Verizon. Although it’s not mentioned in the memo or the leaked image, I’m thinking the Bold 9650 will be offered, too, whereas other providers only have the Curve 8350 for their pre-paid BlackBerrys. But don’t hold your breath on that one.

In all, this would turn out to be a nice option for Verizon Wireless customers, or those who want to jump onto the Big Red bandwagon, without having to deal with contracts.

After seeing the older BlackBerry Bold 9700 run OS 6 just dandy, we could only assume the updated 9780 would...