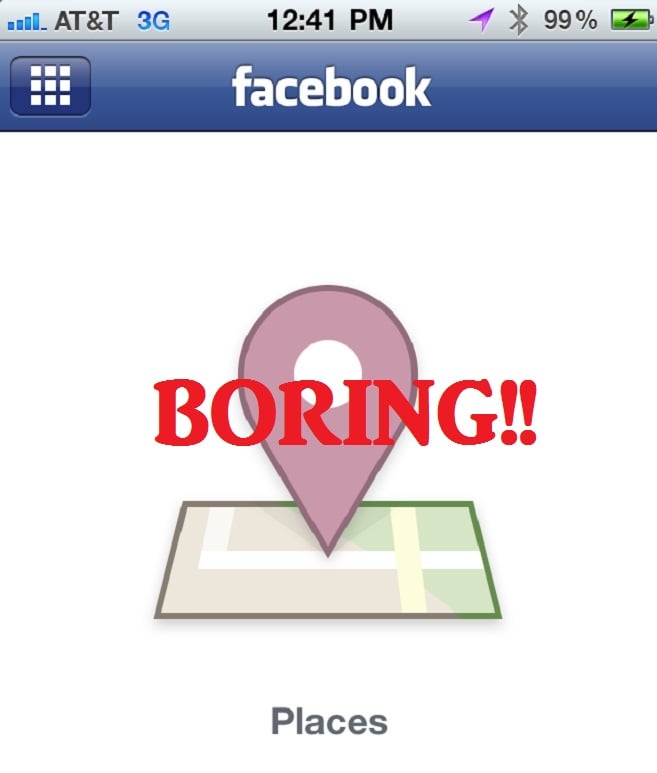 If you thought Facebook Places was scaring the heck out of Foursquare and other check-in services, they’re not letting on yet. Foursquare founder Dennis Crowley is actually firing a few shots across the bow and said he is not impressed with the new location-sharing service.

“I have now had a chance to play around with Facebook Places and it’s not that great or interesting,” Crowley said in an interview with the Telegraph. “It’s a pretty boring service, with barely any incentives for users to keep coming back and telling their friends where they are.”

Crowley admits that the user base of Facebook will make it somewhat formidable but he believes Foursquare will be able to take advantage of that via APIs. Unlike Facebook Places, Foursquare offers multiple gaming aspects – if you check in to a location the most times you’ll become the “Mayor” and sometimes that’s associated with a reward, prize or discount. He said Facebook Places could copy this gaming mechanism but Foursquare is set to offer more incentives to keep it one step ahead of the world’s largest social network.

“I always knew Facebook would launch a check-in tool. I knew that on the day we started creating Foursquare. But I also knew that people needed incentives to keep checking-in and sharing their location,” Crowley said.

Places is slowly rolling out to mobile phone users and its already available as an Apple iPhone app. Right now, it is a bare-bones check-in service where you can also tag your friends but I’d expect it to gain more features as we move on.

Crowley’s right about having incentives but he’s wrong in thinking that Facebook Places doesn’t offer many. That social network is actually filled with real people, so the chance of serendipitously checking-in and noticing a friend nearby is much higher than with Foursquare’s tiny user base.

I also don’t care about being the Mayor of a place because the rewards aren’t worth the effort and the Facebook app or mobile website offers more than just the ability to check in. What do you guys and gals think?

The Apple iPhone 4 does a lot of things well but it still doesn't play that nice with Google Calendar...