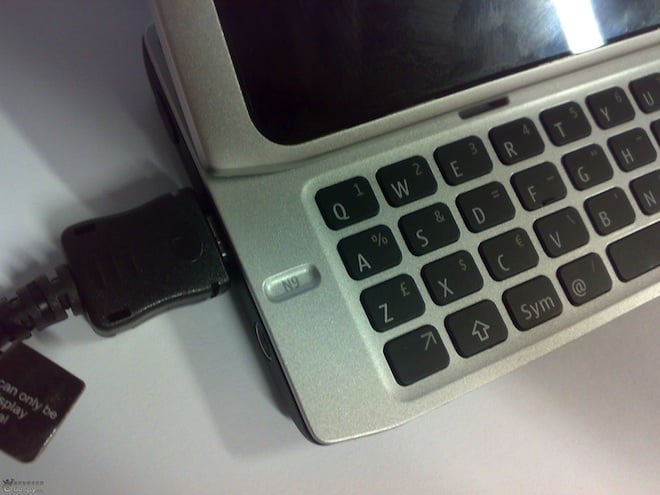 Last Thursday we brought you some photos of a Nokia N9 prototype running MeeGo, and today I’ve got something even better to share; a full list of specifications. Now if the rumor given to NokNok by some guy named “Lee” is right, then this puppy is supposed to have a 4 inch OLED screen with a resolution of 800 x 480 pixels, 1 GHz Qualcomm Snapdragon QSD8250 processor, 512 MB of RAM, 1 GB of system storage, 64 GB internal memory, and HD 720p video recording. Add to that 802.11 b/g/n, HSPA+, GPS, and Bluetooth 2.1, and you’ve got yourself Nokia’s first real chance at a come back.

Today specifications don’t make or break a device as much as they used to back in the day. The first iPhone, as we all remember, was a joke in the hardware department, as was was the 3G. It only started with the 3GS that Apple started putting in processors faster than what the market was using at the time. Then with the iPhone 4, Apple blew everyone out of the water with their super high resolution display and HD video recording capability. All those features will eventually come to Android, but where Apple once lagged, now they dominate.

I bring this up because Nokia used to be the leader. When the N95 came out in 2007 it made everything else look like a toy. Then something happened, I don’t know what exactly, but everything since that device has pretty much been the N95 guts, but in a different body. The N97 is what happens when you’re too confident that your brand will make up for a lack of horsepower. The N97 is what made Symbian-Guru stop blogging because, and I quote: “the pissant processor in the N97 is another aspect that completely kills the device.” The N900 … yes it’s powerful, but the software didn’t really take advantage of what was under the hood.

With the N9, if what NokNok is right with what they’ve published, it at least brings Nokia up to parity with the rest of the industry on a hardware level. Now we just need to see how awesome MeeGo is.

Verizon's joint tablet offering with Google may include a multitouch display from N-Trig, a highly-regarded Israeli company known for producing...