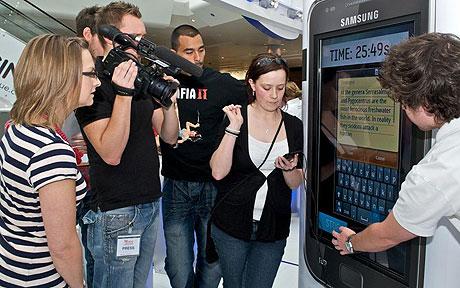 Have you ever heard the unbelievably fast clicking and clacking of smartphone keyboards inside of a Journeys or during the trailers before a Twilight movie? If you thought teens were fast at texting, you should meet Melissa Thompson, a 27-year-old British woman who just smashed the Guinness World Record for the fastest text message ever.

Thompson wrote the phrase “the razor-toothed piranhas of the genera Serrasalmus and Pygocentrus are the most ferocious freshwater fish in the world. In reality they seldom attack a human” in 25.94 seconds, beating the old record held by 24-year-old Franklin Page who wrote the same phrase in 35.54 seconds earlier this year.

What phone did Thompson use to destroy the old record by nearly 10 seconds? A Samsung Galaxy S. And if you thought that the quickest or easiest way to bang out a text message or e-mail was by using a physical keyboard, you’d be wrong. The record was broken using a touchscreen keyboard with SWYPE, a feature that allows users to write words and phrases by sliding their fingers across the screen.

As reported by The Press Association, Thompson was a bit shocked at the world record she now holds:

Ms. Thompson, who works for an insurance company, was shopping with her boyfriend, Chris Davies, 23, when they visited a Samsung roadshow and she was invited to have a go at breaking the record.

“But since we moved in together and I started my job I haven’t been texting as much and, you could say, my fingers were out of shape.

“It’s a real shock to find out that I’m the fastest texter in the world. But using SWYPE helped. Everyone should give it a go and see how easy it is.”

See? Even if you’re not in texting shape, features like SWYPE can help you win competitions and break records with very little effort.

Congratulations, Melissa Thompson. You’re now a legend with a great story to tell your grandkids.

[Via: The Press Association]

Toshiba to unveil the SmartPad Android tablet next week at IFA?

Toshiba doesn't want to be left out of the Android tablet tsunami that should be approaching any time now, and...