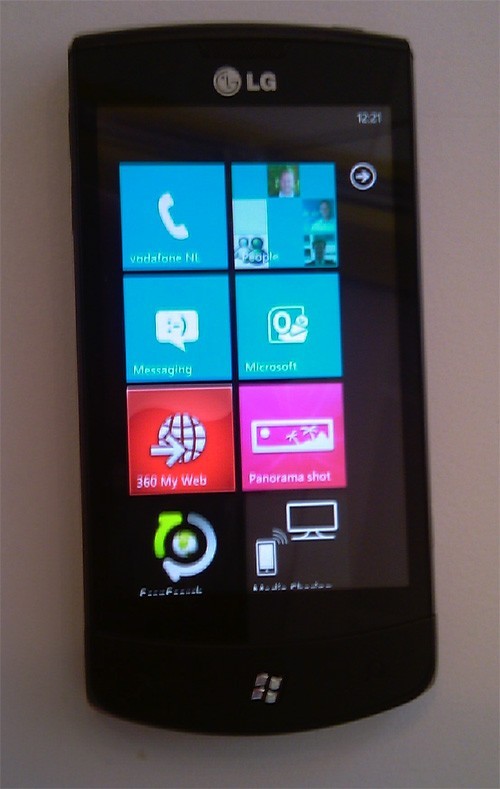 An image of the LG E900, a slate-style handset with Windows Phone 7, was leaked yesterday courtesy of a Dutch Microsoft employee who tweeted the photo. Unlike the previous video which was shot with the blurry filter set to the on position, this picture is up close and crystal clear. While most of us were enthralled with the design of the handset and its sleek black form, the folks at Electric Pig noticed the 360 My Web, an icon from Vodafone’s 360 service.

Vodafone refused to confirm or deny that it was prepping the handset for launch and only noted that “It’s not uncommon for us to load Vodafone 360 on to devices as a test, to help us make a decision on the devices we choose.” The launch of Windows Phone 7 would be quite interesting if Vodafone came to the market with a handset when the mobile platform makes its debut in October.

When Windows Phone 7 was announced, AT&T and Orange were singled out as preferred partners for this fledgling mobile OS. Here in the US, the buzz about Windows Phone has centered on AT&T and it is assumed that the carrier will be the first to market with these hot, new handsets. If this rumor pans out, then the situation overseas may be quite different. Rather than a single source for all your WIndows Phone 7 needs, folks in the UK may have two choices with Orange and possibly Vodafone offering Windows Phone handsets at launch.

Following up on the announcement of RIM's latest entry-level smartphone, the BlackBerry Curve 3G 9300, rumours say it could be...