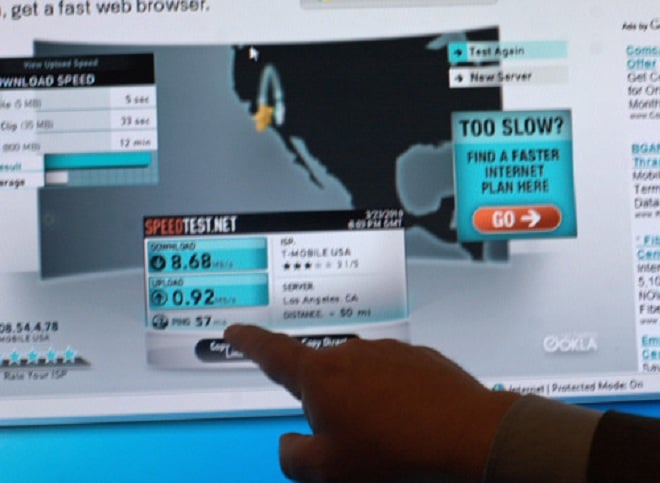 The new markets with access to T-Mobile HPSA+ 3G networks include Boston, Mass.; Erie, Penn.; Fresno, Palm Springs and San Diego, Calif.; Miami, Fla.; Richmond, Va.; Spokane, Wash.; and Topeka, Kan. The speed of the roll out is quite impressive, as it was only a few years ago when T-Mobile didn’t even have a 3G network. Now, it’s arguably offering the fastest speeds to the mobile amount of people.

“Our new network offers today’s available 4G speeds to more people than any other wireless network in the country and we’re not done yet. We are now on pace to more than double our HSPA+ footprint – reaching more than 200 million people by this year – with plans to offer 42Mbps theoretical speeds in 2011,” said Neville Ray, chief network officer for T-Mobile USA, in a prepared statement.

A super fast network isn’t that important if you don’t have a device that can’t take care of it and we should see the T-Mobile G2 soon and this will be able to utilize the HSPA+ 3G network for download speeds of up to 21 Mbps. The G2 is also expected to sport a 3.7-inch screen, a slide-out keyboard, Android 2.2 stock and all the other goodies you expect from a device of this class.

The other smartphones like the myTouch 3G Slide should also benefit from this HSPA+ 3G roll out because the network is backwards compatible and will boost data speeds. Older devices won’t get the full 21 Mbps, but users should notice a nice little speed bump.

By comparison, Sprint’s 4G services with WiMax deliver up to 12 Mbps with bursts, but real-world speeds hover between 4-6 Mbps. Verizon’s 4G network based on Long-Term Evolution technology has been getting 6-12 Mbps in test markets.