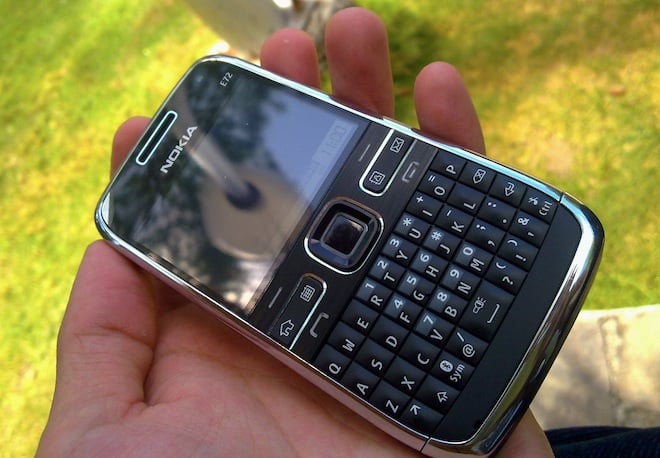 Nokia’s E72, the successor to the much loved E71, just got a firmware upgrade and with it brings compatibility with Office 2007 files, a newer version of the browser, and an update to the built in music player. If you have the E72 then hook it up to your PC and download the Software Updater. Don’t get tricked into downloading the complete Ovi Suite. Like Apple, who by default bundles iTunes whenever you want to download Quicktime, Nokia tries to get Ovi Suite on your machine when all you want is the tiny application used to make your phone better. The E72 has the ability to upgrade itself over the air so you don’t even need to download and install anything on your computer.

User data preservation should keep all your stuff intact, but as a precaution you should always back up your important stuff. Other things that firmware 51 has: Lotus Notes Traveller update, Ovi Store update, Microsoft Office Communicator, Nokia Messaging for Instant Messaging aka Nokia Chat 2.0, an updated menu layout so if you don’t see an icon where you once thought it was then no, it isn’t the drugs from last night that are fogging your mind, Nokia’s just trying to mess with you, performance and stability improvements, and over 450 bug fixes.

When my Danish friend who I’m not going to name here told me she was part of the team responsible for brining the E72 to market, I told her that she has some giant shoes to fill. Many people, myself included, feel that the Nokia E71 is the last great device to come out of Finland. Topping it would be nearly impossible, and unfortunately it wasn’t done. Build quality was taken a step down, the “optical joystick” was a gimmick, the improved camera was nice, so was the 3.5 mm headphone jack, but everything else just failed to get people to jump up and down.

Do yourself a favor and get an E71 if you’re in the market for a cheap smartphone. New they should be less than 250 EUR by now, and the black variant, which came out a year after the initial silver/grey model, is so bad ass that it looks like something Darth Vadar would use.

Just thought I'd throw out some dates to remember. First off there's Nokia World, due to take place on September...