There are a lot of Android tablets making their rounds in the blogosphere asof late, but the oft-leaked Samsung Galaxy Tab is the only real Android-powered competitor to Apple’s iPad to be made official so far. Samsung has announced the 7-inch Galaxy Tab as their first Android tablet here at IFA 2010 in Berlin, Germany, and we’ve had a chance to get all touchy-feely with the new tablet device. At first, it might be hard to see how any device could give Apple reason to worry that its iPad isn’t the end all be all of tablets, but after spending some time with the Tab, it’s clear that Samsung has a potential hit on its hands. 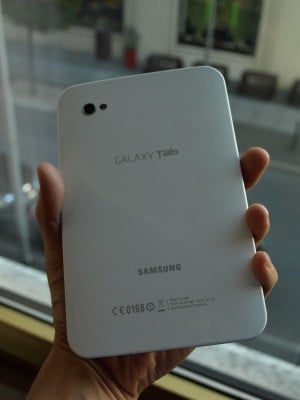 The Galaxy Tab improves on the Galaxy S’s proven formula for success with a perfectly-sized screen, media distribution stores that aren’t anything to scoff at, and uncompromised hardware. It features a 7-inch display, the 1Ghz Hummingbird chip from the Galaxy S, 3G cellular connectivity (with microphone), WiFi (B/G/N), GPS, Bluetooth 3.0, 3-megapixel rear-facing camera (with LED flash) and 1.3-megapixel front-facing camera, Android 2.2 Froyo, gyroscope, digital compass, accelerometer, light sensor, and a 4000 mAh battery. The Tab will be available with either 16GB or 32GB of onboard storage. As far as Android tablets are concerned, this may be just what the little, green robot ordered.

Because it’s running Android 2.2 Froyo out of the box, the Galaxy Tab will come preloaded with the Adobe Flash 10.1 Player, allowing you to stream embedded Flash videos and interact with Flash menus on the web. You also get Thunkfree Office for editing Microsoft Office documents, as well as the Swype keyboard to make typing as easy as dragging your finger across the keyboard. And, with a fully functional 3G cellular radio on board, the Tab is capable of making phone calls using the onboard microphone and speaker or a headset of some sort (wired or Bluetooth). It’s essentially a giant Galaxy S smartphone, but that’s not necessarily a bad thing – remember, the iPad was called a giant iPod Touch just before it went on to sell millions of units.

Speaking of being very similar to a Galaxy S, Samsung made sure that the Galaxy Tab has a couple legs up on its smartphone cousin. First off, the Tab can play 1080p HD video with full hardware decoding. The Galaxy S can only play 720p video. The Tab also includes a massive 4,000 mAh battery that should be good for multiple days of surfing the web, reading books and watching movies. The TouchWiz 3.0 UI that Samsung has skinned atop the Android 2.2 OS has been tweaked with a new “rotation lock” button accessible via the pull-down notifications tray. The front-facing camera means that video chats are also a go. This might seem trivial, but it gives the Samsung tablet a leg up on the iPad.

There’s also a custom calendar app, contacts app, and email app that is tailored for the tablet’s larger display. The calendar and contacts apps offer a custom dual-pane landscape view that’s made to work with the Tab in landscape orientation. The custom email app offers a dual-pane landscape view that’s similar to the iPad’s email client, but one-ups the Apple tablet with a unified email inbox. The calendar, contacts and email apps all integrate with Google services.

Samsung has also blessed the Tab with a Music Hub and Reader Hub, in addition to the Media Hub, to give the user access to downloadable media. You can buy music, ebooks, newspapers, magazines, movies, and TV shows through these “hubs.”

Still, it’s not all is roses and rainbows with the Galaxy Tab. We have to wonder how the Tab’s high-resolution 1024×600 WSVGA display will work with currently available Android apps. Samsung has confirmed that not all of the Top 200 Android apps in the Android Market are optimized to take full advantage of the tablet’s 7-inch display. This could pose a problem going forward, as most other Android devices make use of displays at a maximum resolution of 800×480. The iPad, for example, can double-up on pixels for iPhone apps that aren’t optimized for the iPad’s larger screen and higher resolution. The Tab doesn’t have this functionality, as far as we know, which could be a problem. For it’s part, Samsung is saying that they are working with Google to reach out to developers to encourage them to create apps that can scale to the 1024×600 resolution display on the Galaxy Tab. We’re also told that an update to Android 3.0 Gingerbread will be available for the tablet in the future.

Overall, though, the most impressive aspect of the Tab is its size. It’s thin enough to be sexy, which is only complemented by its glossy back cover. The 7-inch screen is incredibly hand-friendly. You can comfortably hold the screen with one hand, and typing on the on-screen keyboard is ridiculously easy. The Tab could give iPad reason to worry!

Keep in mind that not all features may make it to the US. All features described here are for the international version.

Check out our hands-on video and photo gallery below.

The newly released Verizon Wireless Motorola Droid 2 and summer favorite HTC Droid Incredible are on sale at Sears of...