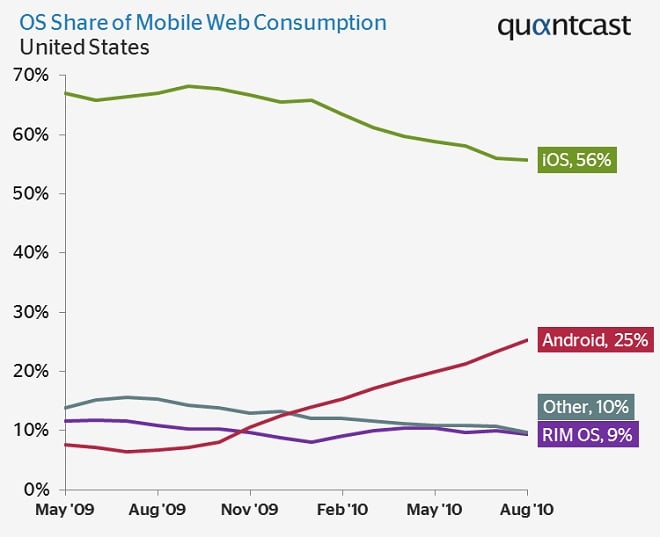 It looks like Android may not be as far behind Apple iPhone (and iOS devices) as it may seem when it comes to mobile web usage, as new research from Quantcast shows the little green robot is gaining on iOS.

In a blog post, Quantcast said Android has 25% of the U.S mobile web consumption market. This represents a 17% improvement from a year ago and the company said that it is taking market share from all comers.

The Apple iPhone, iPad and iPod Touch are still the king of this space with about 56% of the market but that’s an 11% decrease from this time last year.

It’s not just smartphones, as both Android and iOS are expanding to other form factors. The Apple iPad is already a big hit and we should see the company revise the lineup every year like it does with its iPod and iPhone.

Android is going to be making a large push in the tablet space, too. We’ve already seen the stellar Samsung Galaxy Tab, and devices from Toshiba and ViewSonic but these are only the tip of the spear. We should have a slew of Android tablets before the end of the year.

As for the rest of the field, “Other” was in third place with 10% of the market and Research In Motion’s BlackBerry captured fourth with 9%. The BlackBerry has had a notoriously bad browsing experience but that could be addressed with BlackBerry 6 devices like the BlackBerry Torch, which sports a new, Webkit-based browser.

What device do you use to browse the web the most?

Sprint to get Samsug Galaxy Tab in November?

It's been a big week for the Samsung Galaxy Tab, as we've seen it officially announced, get some ridiculous rumored...