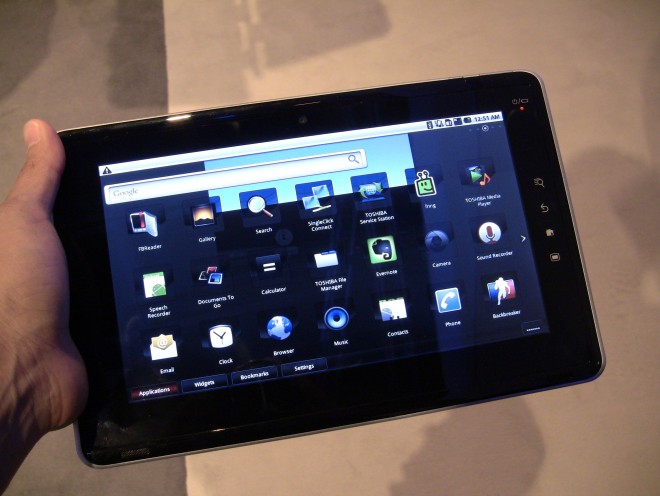 The Toshiba Folio 100 was recently announced at IFA 2010 in Berlin, and we got some hands-on time with the Europe-only (for now) Android tablet that Toshiba is positioning to take on the Apple iPad. The 10.1-inch tablet boast all kinds of connectivity options (including a USB port capable of charging devices), a full-size SD card slot, and Android 2.2 Froyo out of the box. But, are those features enough to make the Folio 100 a legitimate iPad rival, or will it just be viewed as another “fail-io” Android tablet?

Here’s the thing. When you buy an Android tablet, you expect it to give you the complete Android experience. Tablet makers can tailor the user interface to help differentiate themselves from competitors who are all using the same mobile operating system to power their devices, but you still expect to have access to features that Google baked into Android. Features like Google Maps, Google Voice, Android Market, etc. Unfortunately, the recently revealed Toshiba Folio 100 doesn’t off that “complete” Android experience.

Toshiba jumped on the Android tablet bandwagon at IFA 2010 Berlin, where they unveiled the 10.1-inch slate-style device. It’s chock full of technology that, on paper, make the Folio 100 look like a powerhouse of the tablet. The 10.1-inch capacitive touchscreen display spits out 1024 x 600 pixels, and offers multi-touch support. It’s powered by the NVIDIA Tegra 2 dual-core processor, clocked at 1Ghz – speeds that are almost enough to make today’s netbooks feel inadequate. There’s a WiFi radio that will connect to 802.11 B, G, and N networks. It’s got Bluetooth, a full-size SD card slot, 3.5mm headphone jack, miniUSB slot, and a 1.3-megapixel camera for webcam/video chatting. It’s even running Android 2.2 Froyo. The back-lit, capacitive touch navigation buttons are cool. The kicker is that there’s a SIM card slot for optional 3G connectivity and a full-size USB port that’s capable of charging your USB devices. Sounds downright awesome.

Here’s the catch. For whatever reason – Toshiba says it’s due to the 10.1-inch screen size and higher resolution – Google didn’t allow the Toshiba Folio 100 to work with official Google apps. That means you don’t get access to the Android Market, or the apps that come with it. That also means you don’t get Adobe Flash 10.1 Player. Toshiba has done a good job customizing the interface to be all kinds of swipe-friendly and easy on the eyes, but they’ve had to include something called the “Toshiba Market Place” to substitute for Google’s official Market. The Toshiba Market Place is not an apples-for-apples replacement. That’s a big strike against the tablet, in our book.

The Folio 100 could have been something. With the NVIDIA Tegra 2 dual-core processor under the hood, the Folio had the potential to blow the venerable iPad out of the water. The Folio is a big, honking piece of kit (check out the video) that’s almost too unwieldy to be used anywhere outside the living room. The pre-production unit we played with didn’t play nice with pinch-to-zoom multitouch functions. The browser also crashed on us when interacting with IntoMobile.com. But, we could have looked past all that, if not for the lack of access to Android Market.

Will the Folio 100 make money for Toshiba? Probably… in Europe. Will it be anything close to an iPad or Galaxy Tab killer? Well, the word “Fail-io” comes to mind.

Check out the hands-on video and photo gallery below!

The Samsung Galaxy Tab has been rooted

That was pretty damn quick, no? The Samsung Galaxy Tab was just officially announced yesterday, yet it has already been...